Red Bull Global Rallycross concludes its 2017 season this weekend in Los Angeles, arguably the series’ marquee event and now traditional late-season venue at the Port of Los Angeles just outside Long Beach. You can watch coverage of the Supercars finale on Saturday, October 14, at 4:30 p.m. ET on NBC.

For Volkswagen Andretti Rallycross, a three-peat of driver championships is almost guaranteed. Scott Speed, back in the team’s No. 41 Circle K Volkswagen Beetle GRC, enters this weekend with a 30-point lead over teammate Tanner Foust in the No. 34 Rockstar Energy Drink Beetle (756-726). At 74 points back, Loenbro Motorsports’ Steve Arpin (No. 00 Ford Fiesta ST) is mathematically eligible but in need of a minor miracle to overtake either Volkswagen Andretti driver.

A Speed title would be his third in succession after winning the 2015 title in Las Vegas and the 2016 in L.A. last year, snatching it from Foust’s grasp (recap of L.A. weekend here). Foust swept the Seattle doubleheader to keep his title hopes in 2017 alive.

“L.A. is a great track and it’s a home state race for me. I’ve always felt comfortable there,” Speed said. “This year, we go into the final race with a big lead [in points]. My job is to keep us in the most protected position as possible while on track and keep the tires rolling until the checkered flag. If I can do that, we’ll have another championship for the VARX team!”

Foust said of his hopes, “We’re ready to put on a good show for the fans in L.A. this weekend! It’s hard to call the San Pedro Pier a home track, but the location and backdrop is certainly one of the most unique in motorsports. This weekend’s GRC season finale event should be a blast!”

Elsewhere in the Supercars field, Cabot Bigham is back at Bryan Herta Rallysport after missing the Seattle round, and the Northern California native returns to the site where he clinched last year’s GRC Lites title in dramatic fashion after surviving some first-lap chaos. Arpin, Bigham and Rahal Letterman Lanigan Racing’s Austin Dyne make up the three Fords in the field, and Arpin will deploy a split livery this weekend.

The Honda Red Bull Olsbergs MSE trio of Oliver Eriksson, Mitchell DeJong and Sebastian Eriksson will look to deliver a win for the Honda Civic Coupe not far from Honda Performance Development’s headquarters in Santa Clarita, Calif., and after a tough weekend in Seattle.

Subaru Rally Team had a strong Seattle with both Chris Atkinson and Patrik Sandell scoring a podium apiece, the only drivers outside the Andretti pair to make into the top step.

The GRC Lites title was decided at Seattle in favor of Olsbergs MSE X Forces’ Cyril Raymond, the French talent having taken that series by storm all season. Although the title isn’t up for grabs, the Lites cars do put on a good show in Los Angeles, and witnessed some great racing here last year. Coverage of that race airs Wednesday, October 18, at 5 p.m. ET on NBCSN.

The 0.654-mile, 11-turn track at the Port of L.A. is quite similar to last year. A full course breakdown is linked here with a track map below. 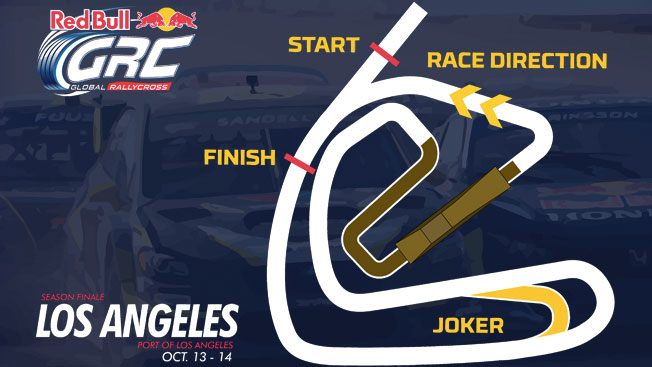