Formula 1 has reported an eight per cent increase in track attendance figures across the course of the 2017 season as more than four million fans enjoyed a live grand prix in the last year.

Thirteen grands prix recorded a rise in attendances through 2017, with five seeing a dip in the number of fans coming through the gates. Two races – Monaco and Abu Dhabi – reported no change in their gate figures.

The highest increase came courtesy of the Azerbaijan Grand Prix in Baku, with a 58 per cent rise following its inaugural race in 2016. Austria, meanwhile, benefitted from the Max Verstappen boom to report a 41 per cent increase.

Races in Russia, Great Britain, Japan, the USA and Mexico all saw falls in their attendance figures compared to 2016. The race at Suzuka had the highest percentage drop of 5.84 per cent.

“The 2017 season was a great spectacle, on and off track, thanks to drivers, teams and, most of all, fans, the beating heart of our sport,” F1 commercial chief Sean Bratches said.

“An attendance of more than 200,000 per event means that for 20 weekends per year, the population of a medium-sized city visits a race track to watch to a Formula 1 Grand Prix.

“Our duty is to make each of these events even more entertaining to unleash what is the greatest racing spectacle on the planet.”

The full list of race attendances as per F1, including year-on-year changes, is listed below. 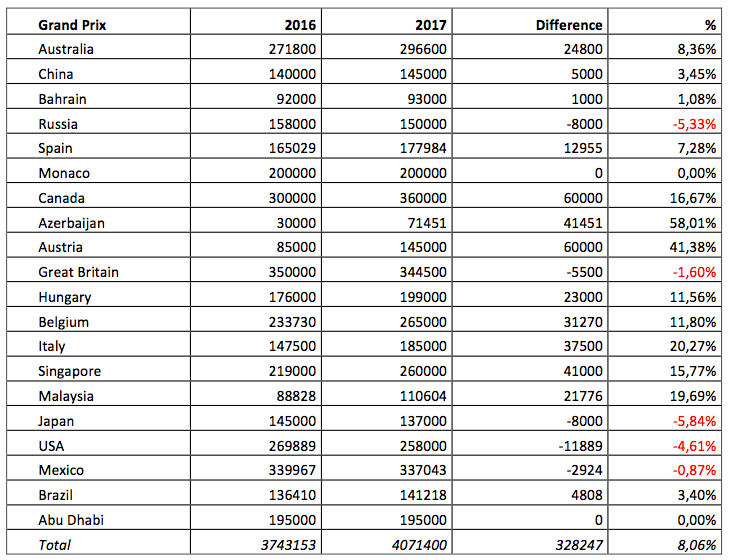