The Borg-Warner Trophy’s first, fabulous trip outside the United States – all the way to Japan for a two-week period – is over. But the memories are vivid as the winning trophy for the Indianapolis 500 enjoyed a whirlwind ride of events and enthusiasm thanks to BorgWarner and Honda.

Plans were hatched over the fall to see the Borg-Warner Trophy go to Japan to commemorate Takuma Sato’s victory in this year’s race. It arrived to great fanfare, and also took center stage at Honda Racing’s THANKS DAY held at Twin Ring Motegi.

Two key individuals were shepherds of the trophy while in Japan, as A.J. Fairbairn, Manager of Restoration Services and Jason Vansickle, Assistant Curator, IMS Museum, traveled with the trophy and unpacked and packed up the trophy at each stop throughout the trip. As the Borg-Warner Trophy travels in three separate custom shipping cases that weigh nearly 200 pounds each. these two ensured it remained shiny and bright at every opportunity and squeezed it through whatever size entrance was there. 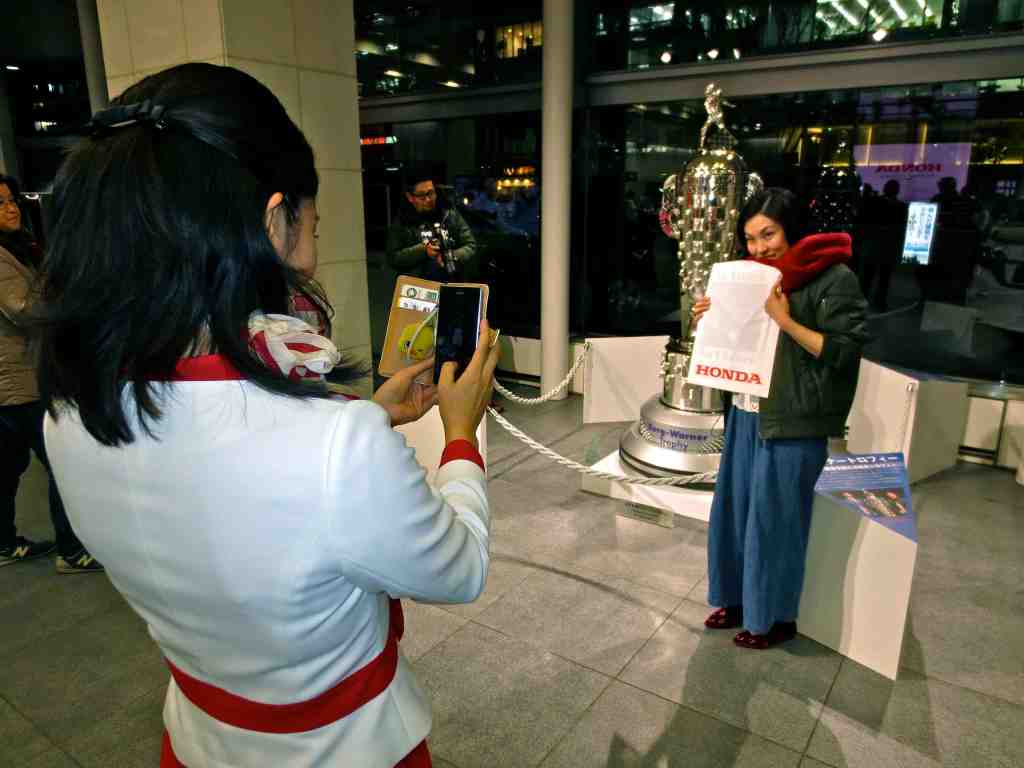 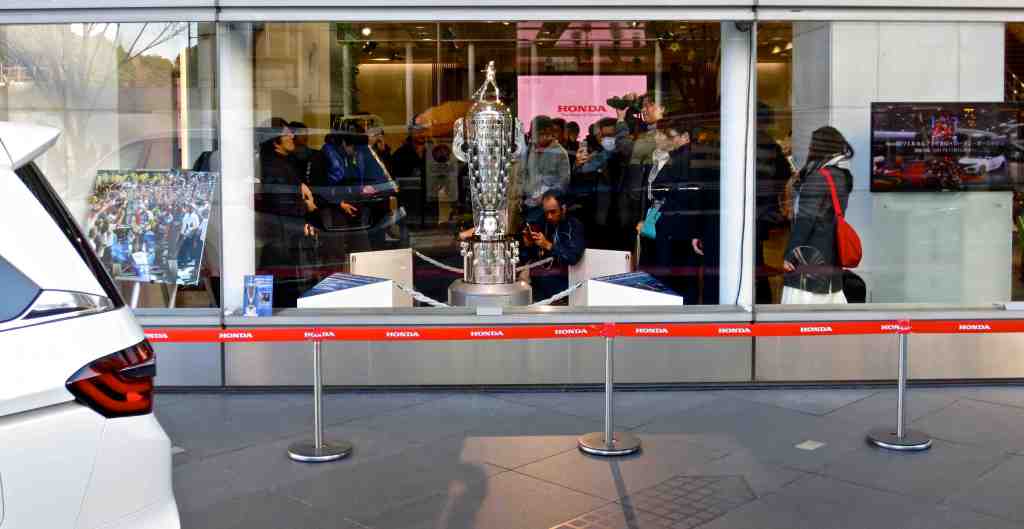 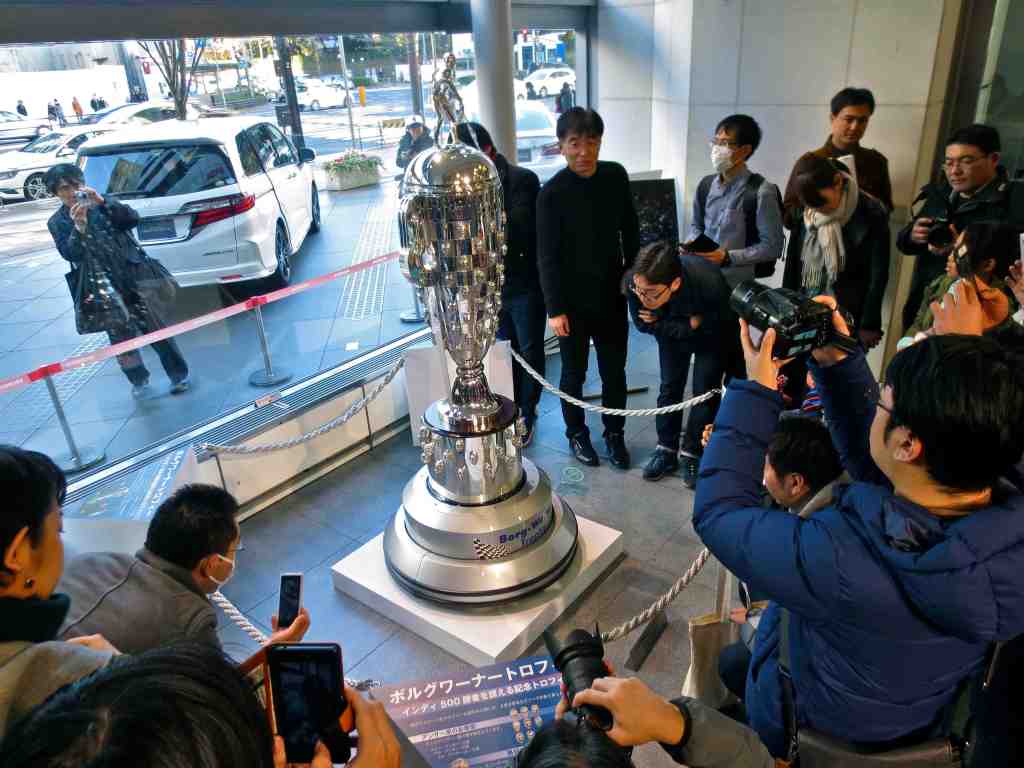 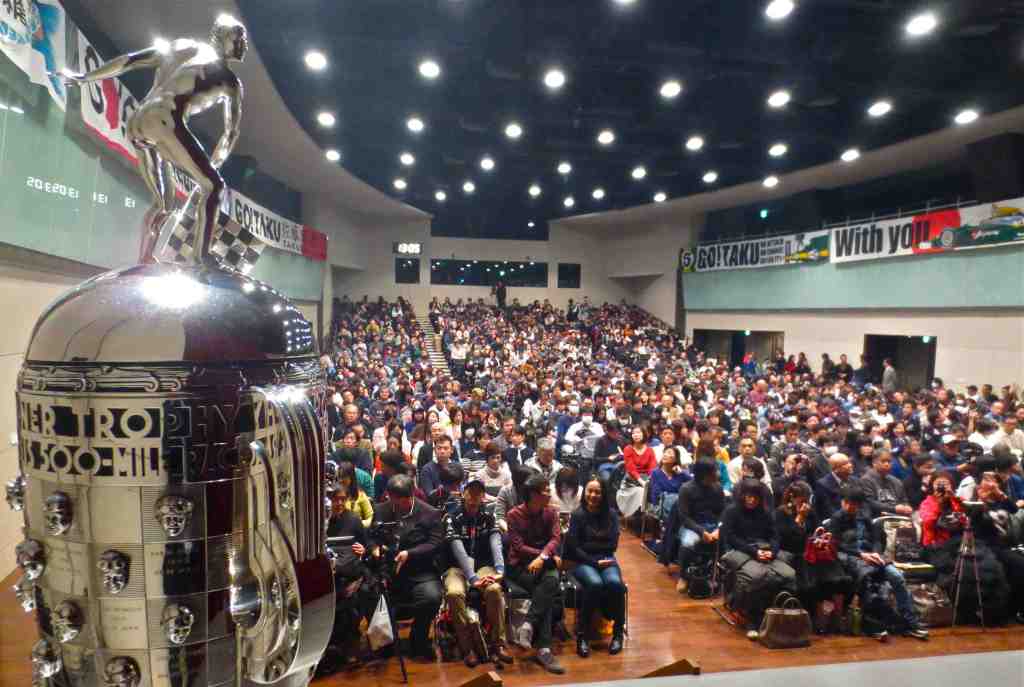 Sato also organized a Fan Club meeting (more than 800 fans in attendance), personally meeting with every fan in attendance and providing signed hero cards. There and smiling for every picture, the eternally effervescent Sato embraced each fan with their gifts they brought. Sato was also particularly warm and welcoming to a handful of handicapped and special needs fan who couldn’t meet him on stage, as he took time to spend with them as well. To end the Fan Day, he redid victory celebration at Indianapolis, and poured a bottle of milk over his head. 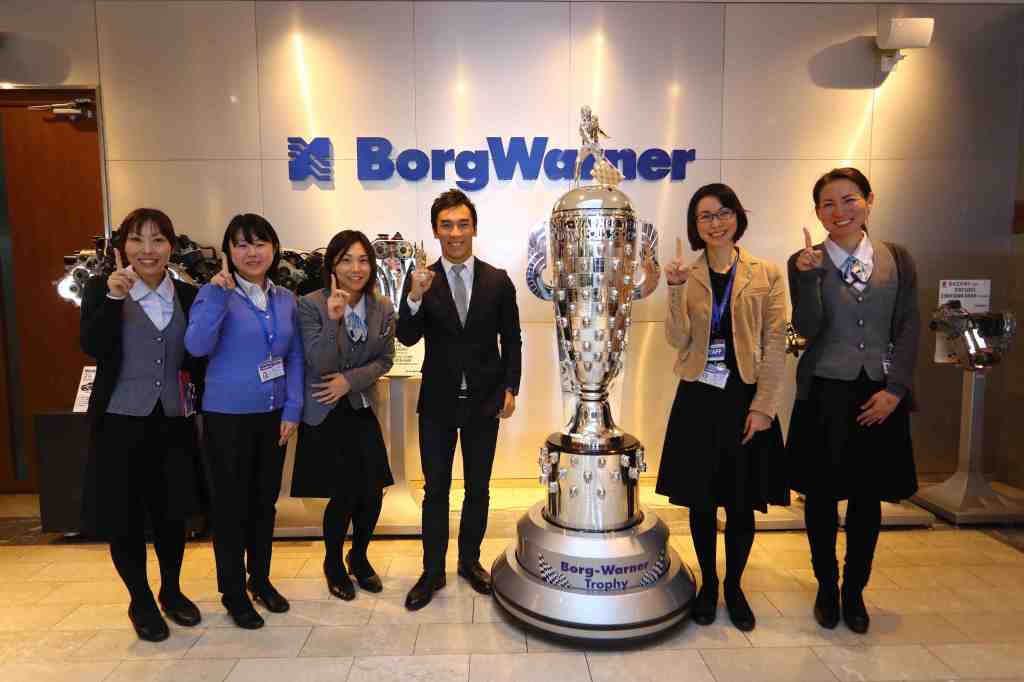 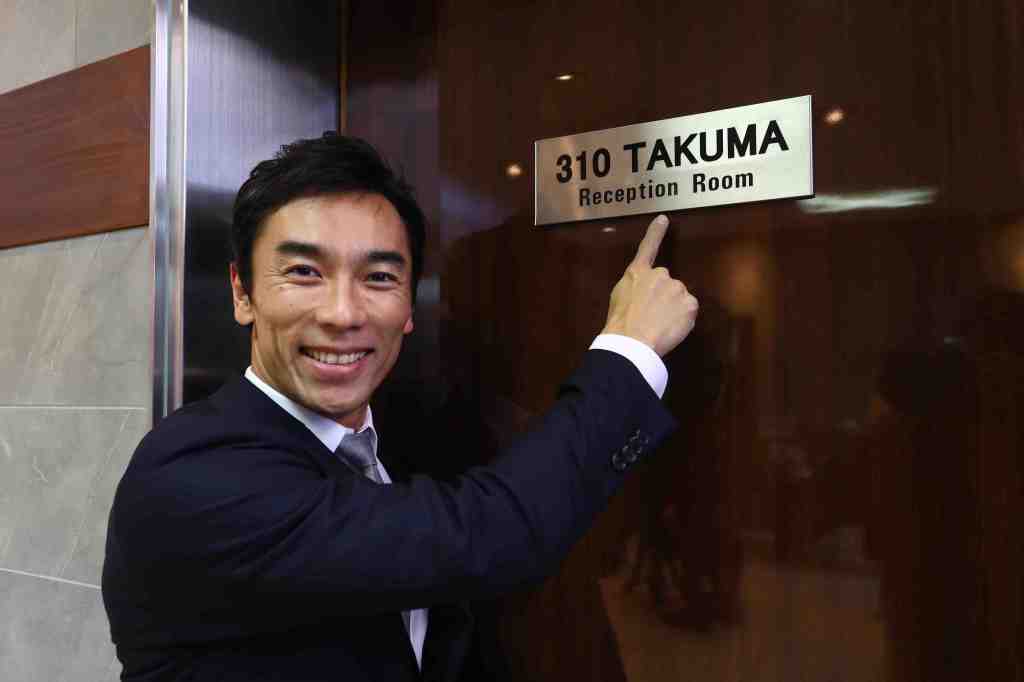 Sato paid a visit to BorgWarner’s Nabari plant as well, which is six hours away from Tokyo. He unveiled a conference room named in his honor there in the town of 80,000, bringing an impressive surprise to that plant and town. This allowed the Borg-Warner Trophy to visit one of its homes on site.

“What a wonderful facility!  I would like to thank Kunihiko Mishima-san (General Manager of the BorgWarner plant in Nabari) and everyone at the plant for their wonderful reception and hospitality,” Sato said. “I was very impressed with the technology and R & D in the plant.

“BorgWarner is just not about turbochargers. It was wonderful to see the Borg-Warner Trophy again at the plant, it has been all over Japan in the last few days – I am so happy it is being shared with everyone!  Overall it was a wonderful trip and I again thank everyone for the congratulations and very warm welcome.”

The trophy went to Japan’s iconic Mt. Fuji, as well.

As there were so many hundreds of fans who witnessed the trip, including the tens of thousands at Honda Racing’s THANKS DAY, capturing the reaction is important. But two fans who saw Sato come so close to winning the 2012 Indianapolis 500 on site, and then watched him win this year, are good to summarize it.

Taiko Hattori and her husband Masahito Mori live in Mito City, which is 30 minutes outside of Motegi. They both attended Honda Racing THANKS DAY, the event at the Tokyo Dome Hotel – Nippon Forum “All For 2017” Awards, Takuma Sato Fan Day and the final event – Car of Japan 2017-2018 Awards in Tokyo.

Both Sato and Scott Gallett, Vice President of Marketing BorgWarner, Inc., reflected on the incredible experience.

Sato added, “It’s been an amazing two weeks with the Borg-Warner Trophy. It’s special having so much support from the fans from east to west – it’s been a busy trip but such an incredible experience. I’d like to give the whole team a big “Thank You” and to everyone who has supported this special, once in a lifetime project – especially Honda and BorgWarner – without both of them, this would have been impossible.

“It’s all about appreciation. This is the reason I am standing here today – only because of everyone’s support. I feel really fortunate to receive this kind of support, very special. It was a really good year this year and equally I am looking forward to 2018. I get my Baby Borg to start the year in January so it will start in a memorable way, to which I am thankful!”

Needless to say there’s a lot of photos to capture the trip, some of which are above, and others are below (All photos courtesy BorgWarner). 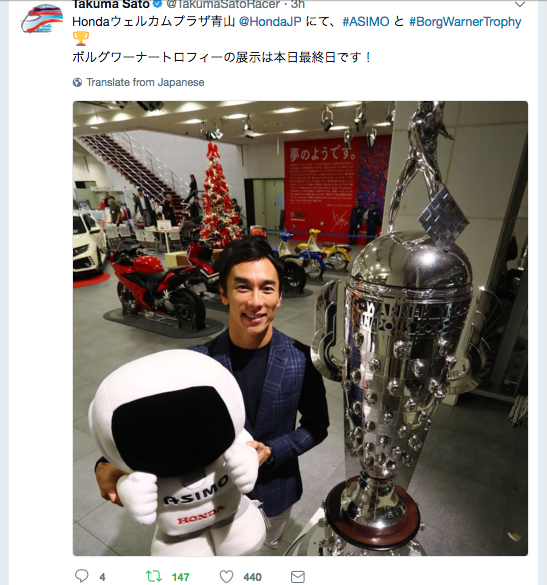 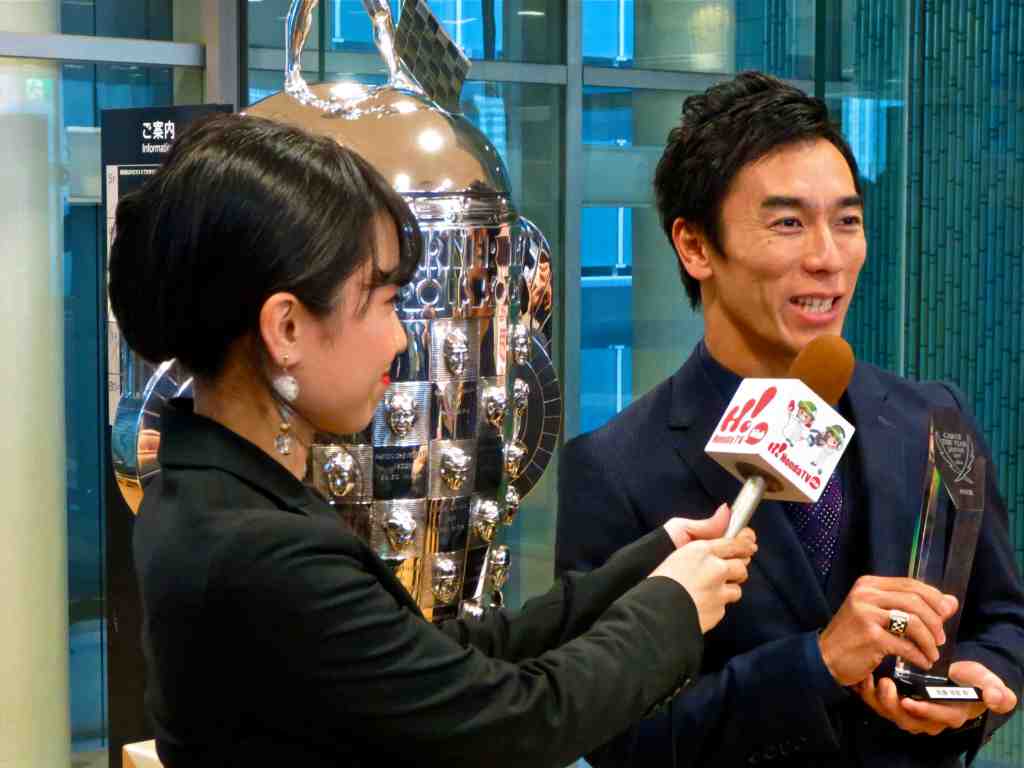 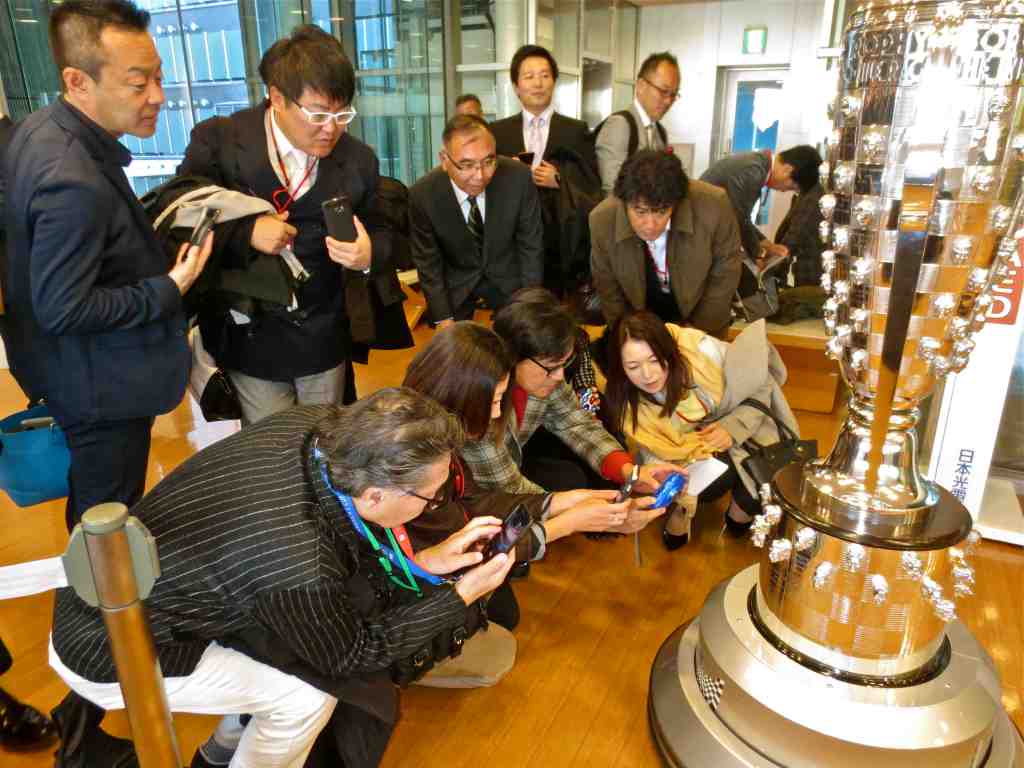 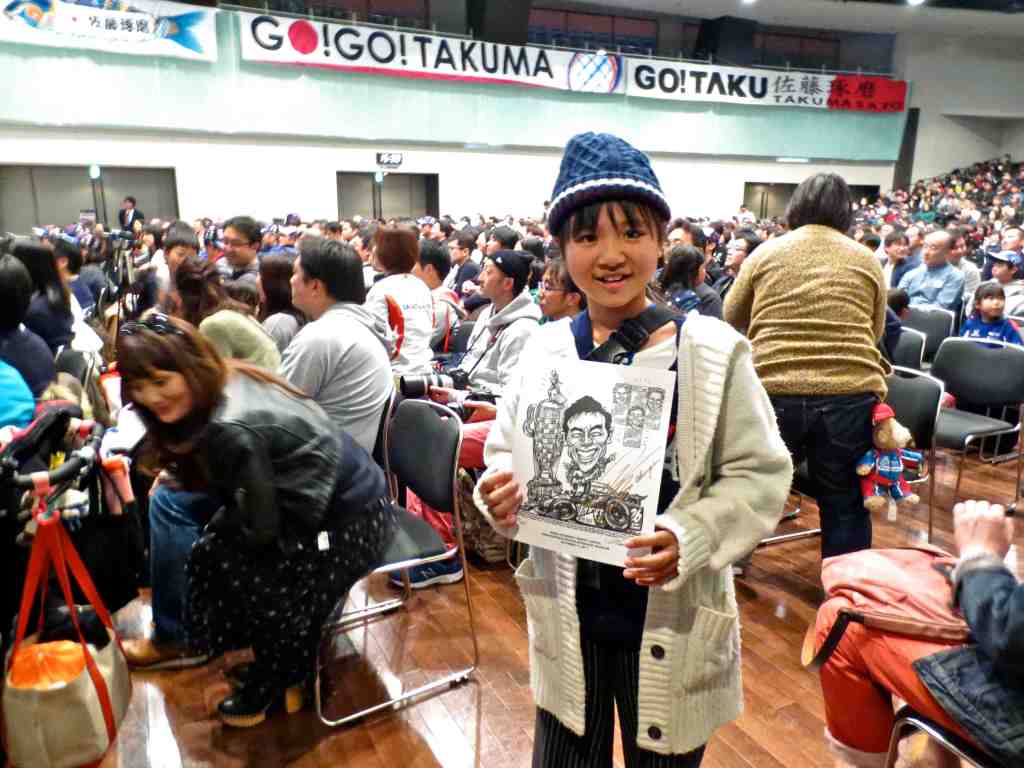 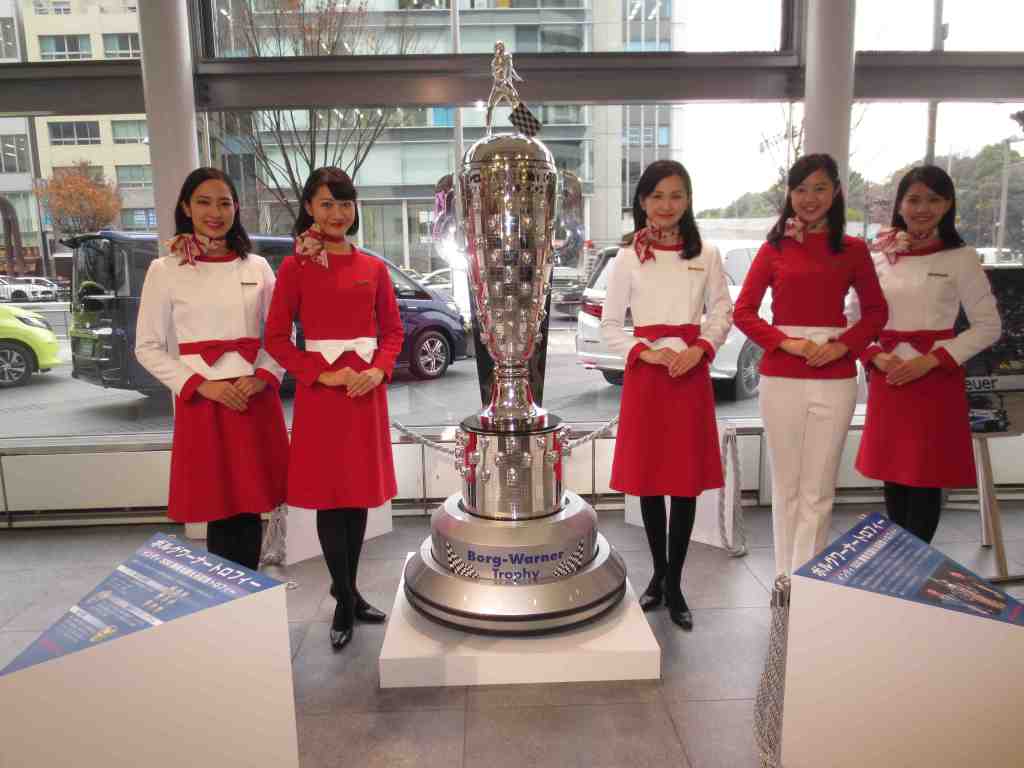 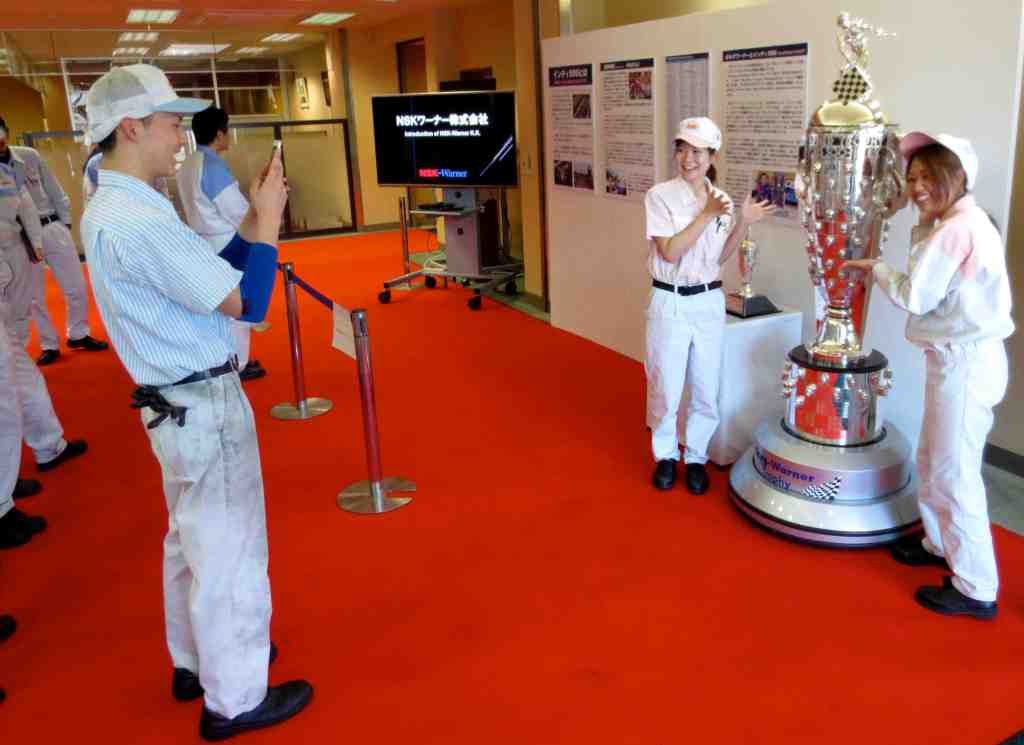 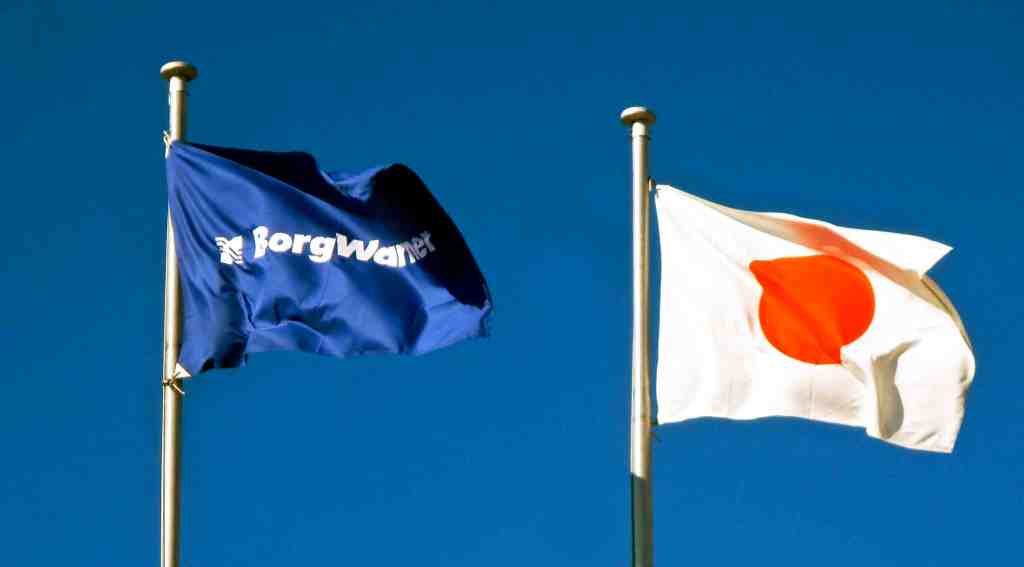 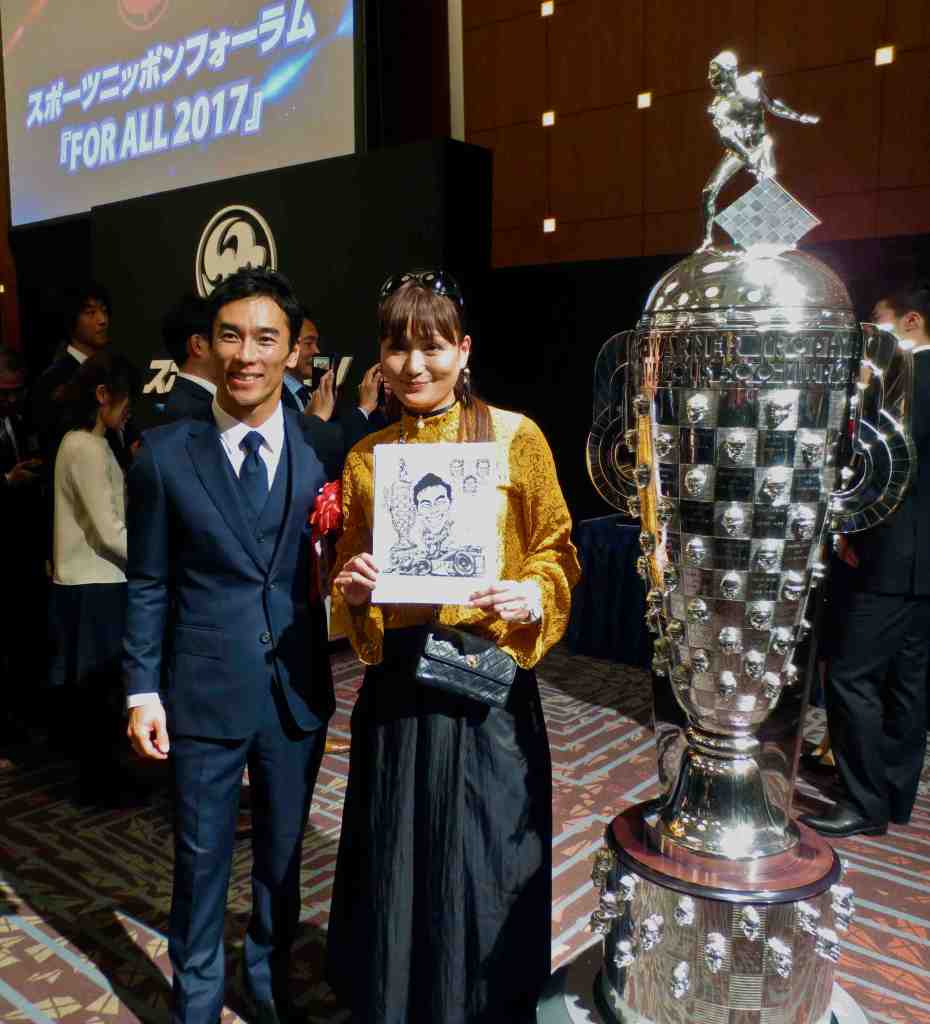 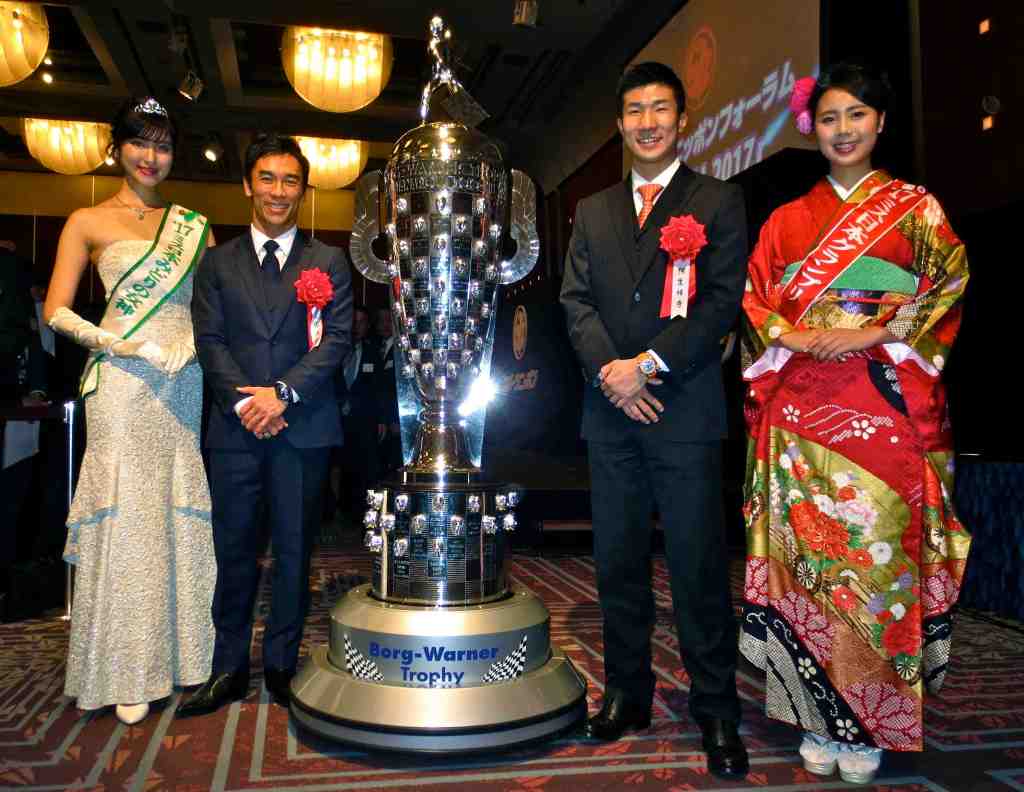 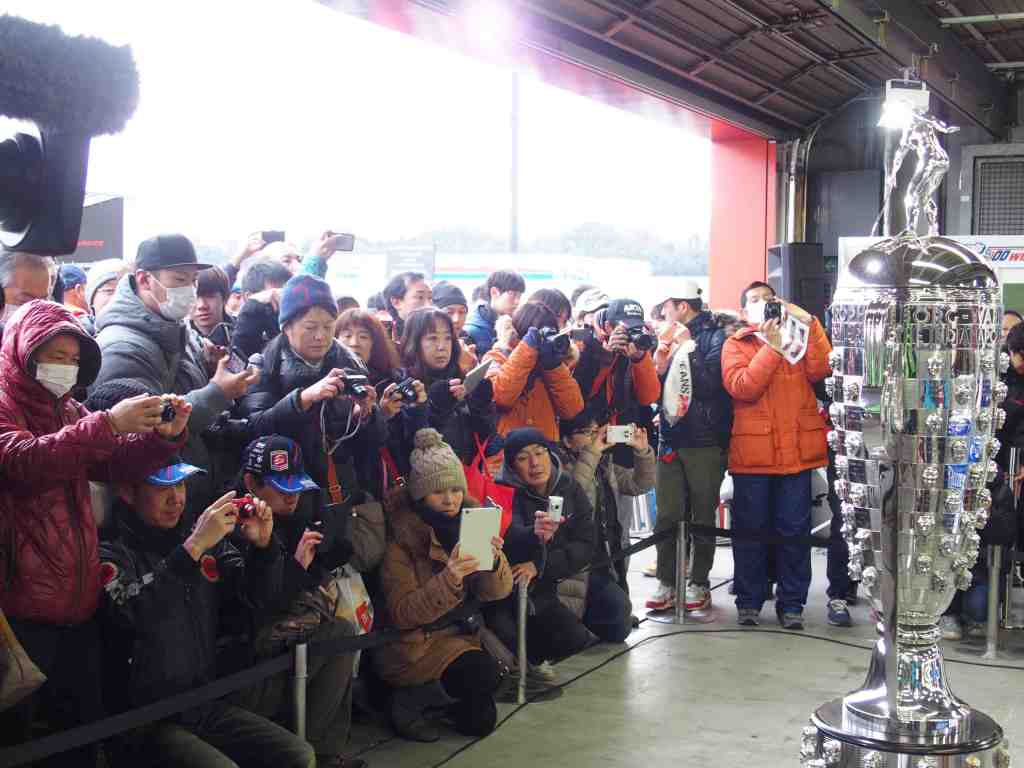 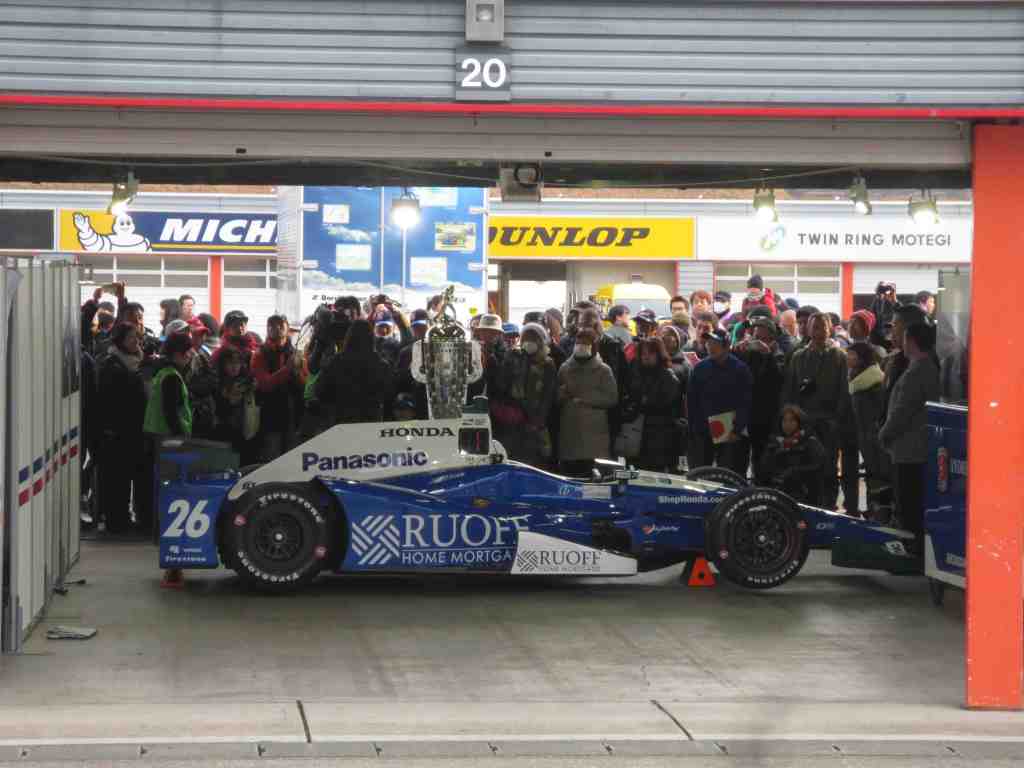 Thursday, November 30 – Borg-Warner Trophy arrives in Japan and is transferred to Utsunomiya for storage before heading to Twin Ring Motegi for Honda Racing THANKS DAY.

Employees view trophy from 8 am to 4 pm then at 2 pm Takuma Sato arrival. 3:30 to 4:00 pm Sato and media at the plant. Evening – 6 to 8 pm Takuma Sato speech at ADS Hall in Nabari for employees, their families, media and the community – approx. 500 in attendance.

They literally rolled out the “red carpet” for the viewing – 8:30 am to 2:30 pm. Takuma was not in attendance.

Friday & Saturday, December 8 & 9 – Honda World Headquarters in Tokyo, Japan. On display 24 hours a day with Takuma Sato appearance for a magazine cover shoot on Friday. The trophy was lit at night so people could view it thru the front window!

Tuesday, December 12 – The Borg-Warner Trophy begins its trip back to the Indianapolis Motor Speedway Museum. 6:30 am – Mini truck from Tokyo hotel to Narita Airport. Fly from Narita Airport to Detroit, MI. Cargo van from Detroit airport to IMS Museum.