INDYCAR announced its 2018 TV schedule on Wednesday, a campaign that promises to bring fans closer than ever to the action with expanded use of in-car cameras.

With the introduction of the new universal bodywork kit for all cars in 2018, in-car cameras will be able to be strategically placed to give fans never-before-seen views from both around the car and inside the cockpit.

According to an INDYCAR media release, cameras will be mounted in the traditional above and behind the driver’s head positions, along with on the car’s nose, sidepod and rear attenuator.

There will also be expanded use of the popular visor cam on several drivers’ helmets.

“This is a unique opportunity to bring the sport even closer to the television audience,” said Mark Miles, CEO of Hulman & Co., which owns INDYCAR and Indianapolis Motor Speedway. “INDYCAR has experienced 38 percent growth in audience over the past four years and providing a firsthand look at the exhilarating action is a way to win over even more fans.”

The 17-race 2018 Verizon IndyCar Series schedule, which begins on March 11 with the Firestone Grand Prix of St. Petersburg, will once again be split between NBCSN (will air 12 of the season’s 17 races) and ABC (5 races).

“As the cable home of the Verizon IndyCar Series, NBCSN is proud to once again showcase the exciting racing that INDYCAR delivers at each event,” said Jon Miller, president, programming, NBC Sports Group. “Our schedule features iconic circuits like Long Beach and Road America and the final nine races of the season, including INDYCAR’s return to Portland, as we crown another INDYCAR champion on NBCSN in 2018.” 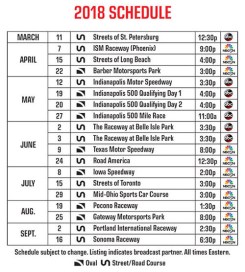