The new kit, which will greatly enhance aerodynamics and give drivers more control and stability of their cars – not to mention give them the ability to draw closer to opponents and not be hindered as much as in the past by turbulence – was formally introduced Tuesday morning at the North American International Auto Show in Detroit.

“Kudos to IndyCar for taking a big, big step,” legendary driver and former IndyCar champ Mario Andretti said during a panel discussion that followed the unveiling and which included several notables, including Jay Frye, IndyCar President of Operations and Competition, as well as legendary team owner Roger Penske.

“Since the inception of ground effects and sophistication of aerodynamics, aerodynamics are a blessing and a curse,” Andretti continued. “The blessing is the downforce to let drivers to go faster, but the curse is you’re creating turbulence and paying the price.

“I think a big step is made now to achieve what drivers have been complaining about, that they can’t get close to the guy in front of them.

“This thing is beautiful as it is, it’s going back to the pure, open-wheel single-seater should be. Having more ground effect downforce is a huge step forward.

“It’s more of a level playing field. … I can’t wait for the first race.” 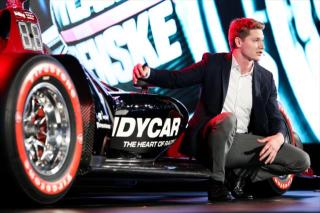 Andretti, who turns 78 on February 28, even joked about wanting to get back in a race car himself.

“I certainly don’t lack enthusiasm,” Andretti laughed, adding, “I hear a lot of positives. The only negative is I don’t have a ride yet.”

To which Penske replied that he would have a car for Andretti tomorrow.

But on a more serious nature, Penske also spoke about the significance of the new aero kit, which will also be a significant cost savings over past cars.

“I think the evolution of the aero kit has been terrific because we can take our existing chassis and put these kits on the car,” Penske said. “It gives us the ability to go to the next step and the drivability of the cars.

“All of the drivers that have tested it are giving us great reviews. I think it’s going to be a home run.”

In turn, that should further increase at-track attendance, Penske said.

“Attendance is up and the demographics we see at these races are great,” he said. “We see more people knocking on the door than we have in the past. Today, the market is strong for us.”

Let's not tell my wife. She'll have me committed to a mental hospital https://t.co/ovwroFblQb

.@MarioAndretti asked @Team_Penske for a ride this year at @IMS, and Roger said he'll keep a seat open for him. I don't think either were kidding.#INDYCAR2018 #NAIAS pic.twitter.com/Njz9NqLRSh

The new aero kit has been nearly two years in the development and making. Developed by Italian manufacturer Dallara Automobili, which also has produced the IR-12 chassis since 2012, the new kit fits perfectly atop both Chevrolet and Honda chassis.

As Penske said, driver response has been overwhelmingly positive to the new kit. Those that have already tested it are almost universal in their praise, while those who have yet to test are looking forward to getting on-track to do so.

The new aero kits produce less downforce than had been generated by previous aero kits, but with one significant boost: much of the downforce created by the new aero kits will come from underneath the car, not only making the car stick to the ground more, but also dramatically reducing turbulence coming off the car, which had in the last several seasons prevented drivers from closing even further on the rear bumpers of cars in front of them.

Also, braking distances into turns will increase, which INDYCAR officials believe will create additional opportunities for drivers to overtake their competition.

And as an aside, the new aero kits will include additional locations to insert on-car cameras to further enhance the experience for race fans watching on NBCSN and ABC.

2017 IndyCar champ Josef Newgarden introduced the new car to media and guests that attended the unveiling. Testing by some teams has already begun, with a two-day open test for all IndyCar teams to take place in Phoenix on Feb. 9-10.

The 17-race 2018 season begins in its traditional St. Petersburg, Florida venue on March 11. One new venue on the schedule is the Grand Prix of Portland (Oregon), which will be held September 2, the penultimate race of the season.

The new aero kit is part of an initiative being called “The Future Starts Now” and that seems to be indeed the direction the sport is going, as well.