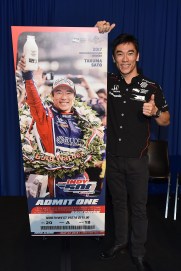 The Indianapolis 500 presented by PennGrade Motor Oil will be held Sunday, May 27 at IMS.