If you see Graham Rahal this weekend at the 2018 Verizon IndyCar Series season-opening Firestone Grand Prix of St. Petersburg, ask him what time it is.

Instead, he’ll talk about his chances to win the 2018 IndyCar championship.

“I feel like it is our time,” Rahal says with a strong air of confidence that this truly will be his year to win his first IndyCar championship.

The son of three-time CART champion and 1986 Indianapolis 500 winner Bobby Rahal has good reason to be as confident as he is. 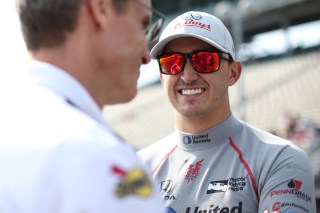 Also in those last three seasons, he’s earned 13 podium finishes and one pole.

“I feel like it is,” Rahal reiterated. “I don’t want to get ahead of myself, but I’m still 29, I’m just kind of entering the prime of my career, I’ve gone through my ups and downs, been with different teams and we’ve all settled in here.

“I just feel like this team is a great place to be and I think we’re at a point where together, we know each other so well and work together so well. We’ve had no changes; we don’t change things, we just don’t. We keep the status quo, just keep going with the great people around us, so, yeah, I feel like it is our time.”

Even at such a young age, Rahal is an experienced veteran. He’s entering his 11th season in IndyCar and 12th overall in U.S. open-wheel racing (competed in Champ Car in 2007), for a grand total of 11 years and 175 race starts.

As he’s gone through all those years, Rahal has watched as other young drivers have gone on to great success in IndyCar.

In Rahal’s first full-time season in IndyCar in 2008, Scott Dixon won the first of his three championships at 28 years old. And then last season, Josef Newgarden became one of the youngest drivers to ever win an IndyCar championship at the age of 27.

And let’s not forget the Indianapolis 500. Alexander Rossi won the 100th anniversary of the Greatest Spectacle In Racing at the age of 24 in 2016, and as an IndyCar rookie.

Rahal has envisioned himself in their place too many times to count.

But heading into the 2018 campaign, with a team that is perhaps the strongest it has ever been at Rahal Letterman Lanigan Racing, Graham said there’s a championship feeling at the team’s headquarters.

“I think we’re going to have a great year,” Rahal said. “I’m excited for what I’ve seen so far. We’ve been doing a lot of testing and overall, there’s been no complaints. Lots of positives for us.” 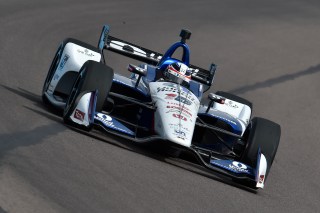 And with the bold, sexy design of the new Dallara body, Rahal says there’ll be lots of positives for the sanctioning body and its fans, making this perhaps the most optimistic season in the last 20 or more years.

“The new car, I think is going to re-energize a lot of fans,” Rahal said. “I think people are going to really enjoy what they see, the performance it has.

“It’s different, different in the way it performs, acceleration and everything else. I think people are really going to like that. Anybody who fell in love with the sport during, say, my dad’s era, are certainly going to love what they see.

“I think it’s good. It’s been fun. It’s a different feel, there’s no doubt about that. But just the way it brakes, slows down, it’s very different than before. You have to drive it differently, think about it differently, but what’s fun about it is the challenge that it provides.

“A lot of race cars year after year after year are very similar. So when you get a big change like this, it makes it exciting as a driver to figure it out. In a lot of ways, it levels the playing field as well. So I think it should be really cool.”

Rahal is also be reunited with last year’s Indianapolis 500 winner, Takuma Sato, who rejoins RLL after just one season with Andretti Autosport.

“I think he helps a lot,” Rahal said of Sato. “He brings a lot to the team. The key for our program is to keep the intensity low and the smiles frequent.

“We’ve been able to keep a lot of guys and have had success because everybody enjoys themselves on this team. When you bring in a guy like Takuma or any other driver, you always have to be very cautious of that, don’t mess up our mojo.

“But the great thing about Takuma is he doesn’t, he’s a great guy, a happy guy and is a great influence on our program, our people and our team. We’re very, very excited to have him as part of that and I think we’re fortunate to have him and his influence to be part of that.

“I’ve had teammates with other guys that don’t have that influence. For some guys, the sky’s always falling and it’s not fun to work with those guys. In this case, Takuma is a guy that slots right in, a lot of experience, a very technical guy and obviously never lacks speed. We all know that.”

While he’s keen about his own championship hopes, Rahal knows it won’t be a cakewalk by any means. A few mistakes here, a few poor finishes there, and his title plans could quickly go awry.

Who does he consider his toughest competitors?

“I think there’s no doubt that Penske is going to be tough,” Rahal said. “They always are. They’re still the team to beat.

“Scott Dixon, he’s an animal. To me, he’s the best driver in the series, so you have to watch out for him and Ganassi, Scott’s going to be right there. Also, (Ryan) Hunter-Reay will have a pretty good year, and I think (Alex) Rossi will be much improved again.