The 102nd running of the Indianapolis 500 will be the final start of Danica Patrick’s 26-year racing career. But make no mistake about it, Patrick — who turns 36 on March 25 — isn’t going to Indy just to simply run laps, maybe sell a few souvenirs and collect a paycheck.

On the contrary. Patrick’s goal for the May 27th race is straight-forward: she’s in it to win it.

Just over 2 1/2 months away, the Greatest Spectacle In Racing will be Patrick’s final race in any series, piloting the Chevy-powered No. 13 for Ed Carpenter Racing, with backing from long-time sponsor GoDaddy. She’s already raced in her final NASCAR Cup race, last month’s Daytona 500. Now it’s on to the second part of the so-called “Danica Double.”

“I love how everything is coming full circle,” Patrick said. “I’m going to close out my racing career at Indianapolis Motor Speedway, the place where so many amazing things have happened for me. I’m back in GoDaddy green and joining a great team. Ed Carpenter Racing is consistently competitive at Indy. I can’t think of a better way to finish out my racing career than at the Indianapolis 500 with this team and GoDaddy.”

Even though she last raced at Indianapolis in an Indy car in 2011, Patrick’s history at the fabled Brickyard has been significant. In her rookie season of 2005, she became the first female to lead laps in the 500. And in seven overall starts there, she earned six top-10 finishes, qualified on the second row in 2008, and in 2009 she finished third, scoring the highest finish ever for a woman in the biggest race in the world 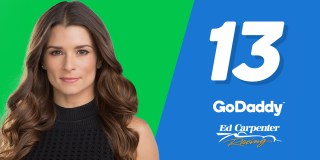 After the 500, Patrick will move on to a new career that will focus on several of her businesses that focus on fitness, lifestyle, cooking and luxury.

In a phone interview with MST on Wednesday, Patrick talked about racing in her final Indy 500 as well as what the future holds in her post-racing career:

I’m thinking about the last race in the capacity of winning it.

MST: Will you be at St. Petersburg this weekend for the IndyCar season-opening race, and what kind of testing will you do prior to the Indy 500?

Patrick: “No (she won’t be at St. Pete). I don’t plan on going to any IndyCar races. I’m going to be in Indy at the beginning of next week to do my seat fitting, and then I’m testing at Indy at the end of March for a day (March 29).”

MST: Will that be the only test you have before the 500?

MST: Have you talked to some of your former competitors in IndyCar about the new car, how things have changed since you last raced in an IndyCar, etc.?

Patrick: “I’ve talked to people about it like engineers and people I know, like Ed (Carpenter) and Matt Barnes, my old engineer who works now as head of engineering for Ed’s team (Ed Carpenter Racing), which was another reason why I really wanted to drive for him. We’ve talked about that kind of stuff, I’ve asked questions for sure, but there’s nothing like feeling it out for yourself. From what I understand, it should be maybe more downforce than from when I raced (previously in IndyCar from 2005-2011), but less than what they had last year. I’m just hoping it’s like riding a bicycle.”

MST: How much do you think you’ll miss racing in general after the Indy 500?

PATRICK: “I don’t miss it right now. It’s only been a couple weeks (since her last NASCAR race), but I’m good. It’s not like I came to the conclusion to be done racing after Daytona and Indy this year overnight. It was all year last year, from the point where I had the very unique situation of a sponsor (Nature’s Bakery) leaving, to coming to the realization that I was really excited to pursue all these other businesses, and they brought me a lot of joy. Not only was it so fantastic that GoDaddy came into the picture to be my final sponsor, but also because they’re helping me with that stuff. That’s what they do. I’m excited about all those. I’m also not afraid of change. I think a lot of people are afraid of change. It’s not that I’m not afraid at all, it’s just that I get nervous but then I get more excited about what could be than worried about what was. And so, I’m excited.”

MST: Do you think you’ll ever see yourself involved in motorsports in any capacity going forward, and if an opportunity comes along that’s so good, would you be tempted to come back and race again?

Patrick: “Actually, the answer probably goes the same for both. I never thought I’d do the Indy 500 again – I really, really didn’t. And here I am. So that’s my ongoing lesson of never say never – unless you put it before the word never. I don’t plan on any of that, I don’t plan on coming back, I don’t plan on being involved with a team or anything like that. All my other businesses are quite different, they’re fitness, lifestyle, cooking and luxury. They’re very different and I very much enjoy them, so I’m excited about them. No, I don’t see that (racing again), but then again life surprises me in ways every couple years that I wouldn’t expect, so I’m always open.”

MST: You’ve become such an inspiration and role model in your racing career. That’s a big responsibility, but you’ve handled it so well. What do you hope you’ve imparted upon aspiring female racers, both on and off the racetrack?

Patrick: “Thank you. I have to say that’s something that kept me going for quite a while at the end. While sometimes it wasn’t fun, I felt like I had a job and I was given a very unique gift and I was supposed to use it to inspire. Even when I felt my day wasn’t going so well, I still was doing things that other people were dreaming about and I stayed attached to that thought. One of the things that was sad about leaving racing was the potentially smaller platform to inspire wasn’t so unique or so big. Again, that’s all in my head. I feel I have the power to do even more beyond racing now that I’m entering into it. But I do hope to continue to inspire. That’s the one thing that I don’t want to go away just because I’m leaving racing and what I grew up doing. I want to continue doing that through my other businesses, whether it be through charitable organizations, attachments through my companies to charity, or messaging through my businesses, through branding that create empowerment, through the books I would like to write that will open people’s minds up and start to develop this healthy relationship with yourself, food, exercise and your thoughts, to create a mind-body connection and look within in instead of out. These are all the things I hope to do. I just don’t want the inspire part to go away because it’s still powerful and I want to do it. I’m not one of those athletes that ever said, ‘I didn’t ask for this.’ I didn’t, but I’m lucky to be able to do it.”

MST: One of the hallmarks of your career is there has never been fear in you, you’ve always met things head-on. I’m asking this in a light tone, but you’re going to be racing in the No. 13 (in the Indy 500). How did that all come about?

Patrick: “Lucky No. 13. It’s also been 13 years since my first Indy 500. So actually, my race shoes are going to have 2005 on one and 2018 on the other shoe to signify my first and last Indy 500. And green is supposed to be unlucky in racing, as well, but obviously we’re GoDaddy green. Whenever anybody has asked me about superstitions, which has been many times over the years, my reply is always, ‘they’re only real if you believe them.’ So, I don’t believe they’re real and I believe green and 13 are going to be lucky.”