The 2018 Verizon IndyCar Series season is under way.

Rookie Matheus Leist — at 19, the youngest driver on the circuit this season and pilot for A.J. Foyt Racing — was fastest in the first practice session of the new season, Friday on the temporary street course in St. Petersburg, Florida, in preparation for Sunday’s Firestone Grand Prix of St. Petersburg.

The young Brazilian covered the circuit in 1:01.7231, his best overall lap of 20 that he took during the session. He also was the fastest Chevrolet driver.

Taking the most laps were De Melo and Harvey, with 21 laps each.

There was three incidents of note – all minor – in the session.

With just under 23 minutes remaining in the session, and while he had the fastest lap at the time, Kanaan spun coming into Turn 4.

Kanaan, who moved to A.J. Foyt Racing during the offseason after four seasons with Chip Ganassi Racing, was piloting the Chevrolet-powered No. 14 when the rear end broke free.

The car did not make contact with either a wall or another car. The incident brought out the red flag and Kanaan limped his car back to the pits for service.

With about 15:45 left in the session, Hinchcliffe also spun into the run-off area in Turn 10, but quickly got going again.

With just under 10 minutes left, Hunter-Reay spun in Turn 4. But like Kanaan’s spin, there was no contact and Hunter-Reay was able to continue on. 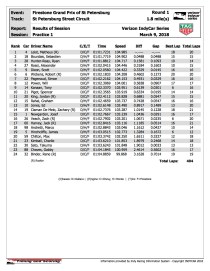