ST. PETERSBURG, Fla. (AP) — Helio Castroneves will not be in the IndyCar field when the season opens for the first time he joined the series. His Team Penske teammates have not forgotten the popular driver.

Josef Newgarden, Simon Pagenaud and Will Power all wore special “Helio” stickers across the top of their visors in Friday’s practice sessions for the season-opening race through the streets of St. Petersburg on Sunday. Castroneves was moved out of Penske’s IndyCar organization at the end of last season and now leads its new sports car program. 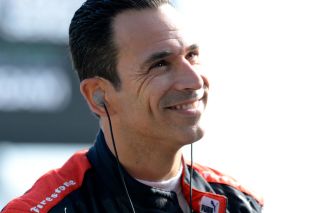 The three-time Indianapolis 500 winner who started in the series in 1998 will be back in an Indy car in May when he goes for a record-tying fourth victory at the showcase race. On Friday, he was still trying to adjust to not being on the track and not seeing his familiar No. 3 making laps.

“I’m not going to deny it is difficult,” Castroneves said. “Leading up to the moments for the first practice and seeing the cars, I’ve been doing this for 20 years and it hasn’t yet sank in that I’m not there. Slowly it’s going to be normal. We adapt. We move on with life. We get over it. We `man up.”‘

Castroneves, a three-time winner at St. Pete, is the grand marshal for Sunday’s race. He joked his command might be directed only at the Penske drivers to start their engines.

Although he’s a spectator this weekend, Power said it felt like Castroneves was still part of the team. To learn the new car that IndyCar rolled out for this season, Castroneves will participate in team meetings. He’ll get his first seat time in the new Dallarra later this month in a test at Barber Motorsports in Alabama.

As for the dynamic within the organization, which went from four cars to three without Castroneves, Power said reigning champion Newgarden fills the void.

“I think Josef kind of takes his spot as far as energy and loudness in the engineering office,” said Power.