“Not a bad way to start the season,” Hunter-Reay told the IndyCar Radio Network. “But it’s early still and we need to get our heads together at Andretti tonight and figure out how to make them go even faster tomorrow.”

All told, Honda-powered cars held 8 of the first 11 spots in the session.

Just like it was to several drivers in the first practice session earlier in the afternoon, Turn 4 continued to be a confounding issue in the second practice.

Scott Dixon and Takuma Sato joined others like Tony Kanaan and Hunter-Reay from the first practice by spinning into the Turn 4 run-off area before righting their cars and getting going again.

Also, Hunter-Reay just missed smacking the wall after hitting a bump in Turn 9.

“Everybody’s sliding around down there,” Hunter-Reay said. “I’m sure no one’s going to say their totally happy with their car.”

With about 10 minutes left in the session, rookie Rene Binder spun backwards entering Turn 3, yet somehow also avoided hitting the wall. Safety workers helped him get his car righted and he took the car into the pits.

With about 3:30 left, 2016 IndyCar champ Simon Pagenaud also spun in Turn 3, leaving him to gently and slowly make his way back to the pits. 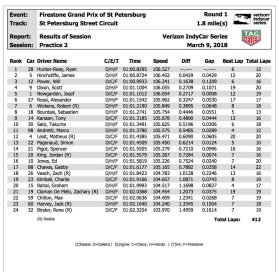