Among incidents in Saturday’s session:

* With about 28:30 left in the session, rookie Matheus Leist spun in Turn 4, bringing out a brief red flag situation.

Interestingly, no drivers have hit the wall in Turn 4. They’ve just gone for a ride, spin and then continued on after getting restarted.

* With about 22:45 left, Ed Jones went into the Turn 1 runoff area after locking up his brakes.

* Shortly after Jones’ issue, Graham Rahal almost lost control, but collected it up and kept it off the wall.

* With just over 13 minutes to go in the practice session, Turn 4 bit yet another driver, as Alexander Rossi added his name to the roster of drivers who spun into Turn 4’s runoff area.

* Jordan King had looked strong, running consistently in the top 5, but with just over one minute to go in the session, plowed into a tire wall exiting Turn 12. The car suffered minor damage and King was uninjured.

Conditions were significantly different than Friday’s two practice sessions. Friday was near-perfect conditions with sun shining throughout the day and temperatures in the mid-70s.

Saturday morning, however, the temperature was 66 degrees at the time practice began, with a heavy cloud cover and no rain. 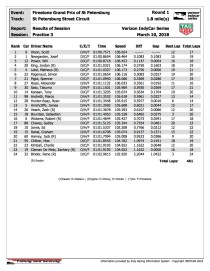