It may not work at many other places, but to win or do well at St. Petersburg, the best place of late to start seems to not be on or near the pole, but rather the polar opposite: last place.

It worked for Sebastien Bourdais last year, when he started the Firestone Grand Prix of St. Petersburg from the back of the pack, worked his way through the field and wound up winning.

Starting from last almost worked once again in Sunday’s race. Graham Rahal had a tough qualifying session Saturday and was the last driver on the 24-driver grid when the green flag fell Sunday.

But just like Bourdais did last year, Rahal didn’t panic. In fact, you could make a strong case that he took a page right out of Bourdais’ playbook from last year’s race.

Rahal methodically worked his way up through the pack over the course of the race’s 110 laps, stayed out of trouble and brought his No. 15 United Rentals Honda for Rahal Letterman Lanigan Racing to a podium finish to start the 2018 Verizon IndyCar Series season. 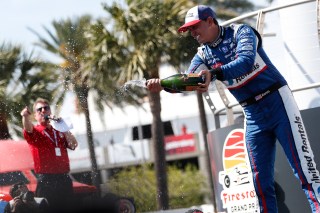 Bourdais won again Sunday (started from 14th this time, making it two wins in a row in the season opener). Bourdais and Rahal finished 1-2 after race leaders Robert Wickens and Alexander Rossi tangled exiting Turn 1 with two laps to go.

Wickens would be knocked out of the race and finished 18th, while Rossi would bounce back from the incident with Wickens to finish third.

“I was inside of Bourdais, too, on the restart, and I just looked up, and I saw the marbles, and I thought, this isn’t going to work,” Rahal said. “So I literally just said to myself, take fourth, let’s go home.

“And next thing I know, I saw smoke, and bam. It worked out even prettier than that.”

So, is there really something to this deal of starting last at St. Pete? Rahal certainly seems to think so.

“You might as well start last,” he said after Sunday’s race. “If you look at the last few years, I think it’s the best place to start.

“It worked out well for Seb (Bourdais) last year. I’m trying to think who else won that started pretty much last or got knocked out. Well, even Bourdais today, he got knocked out (early in the race) and went to the back, went to last, and it worked out.

“Even the year I won here (2008), I got hit by Will (Power), and we went to dead last, and it worked out. I joke around, but it might not be a bad play for the future. I mean, I had tires for days, so I was looking good for race day.”

It wasn’t all that easy, though. While most teams had a substantial amount of preseason testing coming into the weekend, Sunday marked the first time in actual race conditions for the highly-touted new 2018 Dallara body. 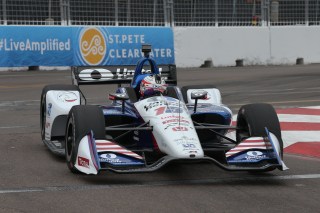 But at the same time, like pretty much anything that is radically new, it will take time for drivers to get used to the new car, particularly handling. No, there’s nothing wrong with the handling, it’s just different and a tougher than what drivers became used to with the former chassis.

“These cars are far more demanding than anything we’ve driven — not demanding in the sense that it’s harder to get the speed out, it’s just easier to mess up,” Rahal said. “The window of opportunity, the margin is just very, very, very, very slim.

“The old car, when you’d get a big moment of yaw, like when the car would snap out, I don’t want to say it would straighten itself out, because it had so much downforce and sideforce. This new car doesn’t have anything, so if it snaps, it just keeps going. You saw that today. Guys were in trouble a lot, and certainly the tires have become very tricky in their current form, what we have, and you saw it in the brake zones. There’s going to be a lot of excitement this year. There’s going to be no lack of that for sure.

“It’s the trickiest I think all of us have had it, and I also think in some ways, I know it sounds crazy, in some ways I almost think rookies had a little advantage here this weekend because they don’t have an expectation of what the old car should be here. The first practice session, I literally felt like I was driving somewhere I had never — my mind is telling me, you should be able to do this, you should brake here, you should do that, and you just couldn’t do it, and it was just nasty. This car is so different than anything that I think a lot of us have driven. It’s fun, but it takes a while to adapt.”

Despite how hard it was to drive the new car, at the end, it appeared Rahal adapted to it pretty well and quickly. Going from starting last to finishing second – and almost first, like Bourdais did in last year’s race – has Rahal off in the right direction.

“We look at ourselves as championship contenders,” Rahal said. “I don’t care what happened the last two days (Friday’s practices or Saturday’s practice and qualifying), we still believe in that.

“We know that we are. This is a great way to start.”