IndyCar team Schmidt Peterson Motorsports announced today that it is extending and widening a unique sponsorship and mentoring program with students from Lincoln Technical Institute.

The students, primarily from auto and diesel training programs, got an insiders experience with the team, taking part in team meetings, watching team workers prepare and service the No. 5 Arrow Electronics Honda of driver James Hinchcliffe, sat on pit boxes during practices, qualifying and, of course races. 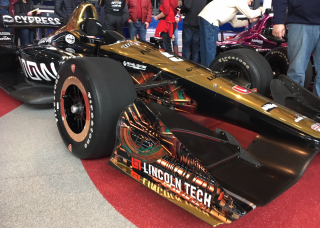 The overall experience was to get students more interested and involved in potential careers in the IndyCar field.

“We said at the beginning of last season that we knew our students would benefit and learn from the professionalism and drive of the Schmidt Peterson Motorsports team,” Lincoln Tech President and CEO Scott Shaw said. “But the experience they received working with the entire pit crew team and in particular crew member Cole Jagger – a Lincoln Tech graduate himself – went beyond even our own expectations.

“We were grateful for the time they spent mentoring our students, and we are thrilled to once again be part of the racing legacy of team owners Sam Schmidt and Ric Peterson.”

Lincoln Tech will also once again serve as an associate sponsor on Hinchcliffe’s car for the entire 2018 IndyCar season.

Students are selected based upon grade point average, attendance, conduct and overall commitment to becoming outstanding automotive technicians. An interest in IndyCar and a desire to work in the industry is also considered.

“It was the best weekend of my life,” Crist said after the event. “It reminded me of why I joined this field in the first place and to never give up on my dreams.”

Jagger will oversee the mentoring program this season. For Jagger, being involved especially hits home, as he is a graduate of Lincoln Tech’s Indianapolis campus.

“I totally enjoyed working with the Lincoln Tech students that participated in the Mentor Program last year and look forward to meeting this year’s group,” Jagger said. “Being a Lincoln Tech grad, I hope the students realize that if you have a passion for cars, a career in racing is something that’s not out of reach. If I can be an example for them to follow, that makes it even more rewarding.”

In addition to the at-track activities of the mentoring program, the Lincoln Tech branch in Indianapolis will utilize CNC computerized machining and manufacturing tools to assist in creating car parts for SPM.

“Through this unique partnership, we’re able to hopefully find the next class of talent that could one day be part of our organization,” SPM president Jon Flack said. “We’re looking forward to another year of the mentorship program and having their students be ‘boots on the ground’ gaining real-life experience with our team.”