So the third-generation Andretti, along with his team, Andretti-Herta Autosport, came up with a plan and design that will take longtime race fans back in time when it appears early next month for the Phoenix Grand Prix.

Marco Andretti’s No. 98 Oberto Beef Jerky Circle K/Curb Honda will be decked out in the colors of the car his grandfather won his last race on the one-mile short track 25 years ago. 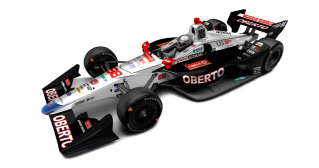 “When the idea of a throwback livery celebrating my grandfather’s final win was thrown around, Oberto was ready to get to the drawing board,” Marco Andretti said in a media release. “The black, white and red car resembles many of my family’s race cars and was a big part of my life growing up.

“It’s really cool to be able to add one of my cars to that family legacy.”

The car is a virtual double of the legendary Newman-Haas Racing and Texaco/Havoline-sponsored car Mario drove on that celebratory day in the Valley of the Sun 2 ½ decades ago.

Various events and ceremonies during the April 6-7 race weekend will honor the senior Andretti. That includes several of his former competitors who will be on hand to celebrate with Mario, including Emerson Fittipaldi, Bobby Rahal, Jimmy Vasser, Paul Tracy, Arie Luyendyk, and of course, son Michael Andretti and grandson Marco Andretti.

Check out what happened on that day 25 years ago: