Danica Patrick will most definitely stand out in the 33-car field when she makes the final start of her racing career in the 102nd running of the Indianapolis 500 on May 27.

Patrick on Wednesday unveiled the new bright neon green paint scheme for both her Ed Carpenter Racing No. 13 GoDaddy-sponsored Chevrolet, as well as the equally striking firesuit she’ll wear behind the wheel in the race.

Patrick had a hand in the design of both, particularly the firesuit, which she designed herself, a rarity among drivers not just in IndyCar racing, but in most motorsports. 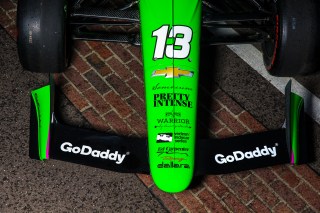 Patrick’s car will also have black and magenta highlights as part of the very clean-looking design, as well as carry logos for her health and fitness line, apparel line and vineyard as she completes the second part of her racing career-concluding “Danica Double.”

“I will always love the Indianapolis 500, and I’m definitely soaking in all it takes to prepare,” Patrick said. “I’m looking forward to getting back behind the wheel of an Indy car. The Ed Carpenter Racing team has been great.

“I have to say, this is all better than I imagined when I first started visualizing my last race. I’m back in my GoDaddy green, tapping my creative side to help promote my own businesses, and finishing out my racing career at Indianapolis Motor Speedway, the track where so many special things first happened to me as a driver.

“It’s the ideal scenario to close out my racing career and a fitting way to transition into what’s next for me as an entrepreneur. I’m ready, let’s do this.”

Patrick and most other IndyCar teams were expected to take part in a three-day test this week at Indianapolis Motor Speedway, but weather issues prompted the test to be rescheduled to May 1-2.

Those sessions will mark the first time Patrick has been behind the wheel of an Indy car since 2011.

Even though it’s only for one race, team owner Ed Carpenter is looking forward to having Patrick drive for his team in the Greatest Spectacle In Racing.

“This new set-up gives the car a downforce more like what Danica drove seven years ago,” Carpenter said. “So it’s less of an adjustment for her than it might be for other drivers.

“And bottom line, she’s here to take her best shot at winning. She’s a fierce competitor, especially on this track. Our team loves that.”

Patrick’s design creativity will extend from her firesuit and the car design all the way to the shoes she’ll wear.

It was 13 years ago in the 2005 Indy 500 that she became the first woman to lead laps in the legendary event. Her shoes in this year’s race will reflect that milestone.

“I’m going to have the year 2005 written on one shoe for the race, and 2018 on the other,” Danica smiled. “I guess I might be getting a little nostalgic. I’ve been saying, if I win Indy, I’ll put the number 13 on my hand every day for the rest of my life.”