The Valvoline 200 on April 4, 1993 marked the 52nd and final win of Mario Andretti’s illustrious IndyCar career.

It came at a track – Phoenix International Raceway (now ISM Raceway) – that was one of the most significant tracks in Andretti’s life.

It was in 1964, when the Italian-born driver first embarked upon an IndyCar career, that Andretti began a love affair with the one-mile oval that continues to this day.

And now, in fitting fashion, the legendary Andretti will be honored today and throughout the weekend at ISM Raceway, paying tribute to his career and his final win there 25 years and one day ago.

That final win is something that has stuck with him throughout the years. And tonight, he’ll help the track kick off the race weekend with a dinner in his honor, paying tribute to all he did not only for racing in general, but for ISM Raceway in particular.

It will be a start to three days of memories of Andretti’s career, including a display of the four Indy cars he won races in at the former PIR.

More importantly, Andretti will be feted by a number of peers he raced against in that memorable race in 1993, including such luminaries as Emerson Fittipaldi, who is traveling from his native Brazil to attend, as well as Paul Tracy, Bobby Rahal, Al Unser Jr., David Kudrave, Lyn St. James, Jimmy Vasser, Arie Luyendyk and Mario’s son, Michael.

“(ISM has) been running a number of interviews of all these greats on Twitter and man, they’re all kind to me, I don’t know why,” Andretti said to MotorSportsTalk with a chuckle. “But they’re really nice, which is so neat. Our racing family is relatively small and very tight, but there’s so many things you just don’t expect.

“I have a very special appreciation for that. I don’t know how I can ever repay that. That’s the part that has the biggest value, just to hear these guys reminisce and talk about it. They’re too nice. Next time I’m going to have to buy them a beer (he said with a laugh).”

When asked how much he remembers his last win, Andretti continues with another laugh.

But drawing serious, Andretti added, “It’s a great reminder and I’m totally flattered that they’re using this to promote the race.”

When Andretti came to the world of Indy car racing in 1964, little did he know how much Phoenix and PIR would play in his development as a race car driver.

“Phoenix meant so much to me throughout my career,” Andretti said. “I was part of the Firestone group and the development of the (Indy car) tires back in the 60’s when I graduated to IndyCar.

“Phoenix as a venue was golden for a lot of testing during the winter and a lot of it, believe it or not, was related to Indianapolis tires, as well. We did all the construction work at Phoenix which was pertinent to Indy, and Indy was just compounds.

“The bottom line is I spent a lot of time there and the team I joined as a rookie in IndyCar in 1964 was based there in Phoenix. So, that was my second home and I probably have 100,000 miles on that track.

“Each test was thousands and thousands of miles. To have the track showcasing or reminding me and giving me this kind of platform, I think it’s awesome. … They’re going all-out and I’m totally flattered. I can’t wait for it to happen. I’m just totally elated and proud.”

In just a few years, NASCAR and Darlington Raceway turned their annual Throwback Weekend into one of the more popular race weekends on the schedule.

Andretti would like to see other tracks on the IndyCar circuit do something similar, honoring other great drivers that had unique ties to those facilities.

“Yes, why not? Why not show the appreciation from where we came from in the series,” he said. “It seems like IndyCar lost some ground when there was a split (with CART after the 1995 season), but we need to remind our fans that we’re the oldest racing series (Indy car racing) in the world. We’re older than Formula One and NASCAR, and never forget that.

“We have a rich, rich history to be proud of. When you look at our race records, they go back into the ‘20s when race records were first to be followed and saved, like when we go for all-time wins and things like that.

“That’s all meaningful and many of the champions of relatively recent decades that accomplished so much are still around, like me, to enjoy the moment. Why not showcase that and show the fans that there’s lots of history and the young lads of today, that’s what they’re trying to measure up to.

“When they start compiling wins, they’re looking at those overall records. They have a lot of life and it didn’t just start 10 years ago, it started a century ago. So yeah, I think all that is very important. We’re proud of all that and we definitely should showcase it. I would encourage that, for sure.”

All those days and weeks of tire testing set Andretti on a course that led to one of the most successful records any individual driver has compiled:

* Became only the second American to win an F1 championship – and the last one to turn the feat – in 1978.

* Became the oldest driver to win an IndyCar race, a mark that still stands. The place? Phoenix 1993, when Andretti was 53 years old. He also became the first driver in Indy car history to win races in each of four decades (1960s through 1990s).

Now 78, Andretti continues to race around tracks from Pocono to Sonoma in a specially-built two-seat Indy car, giving exhibition rides to fans and celebrities in his role as an official ambassador for the Verizon IndyCar Series.

But don’t think for a minute that Andretti wouldn’t love to turn back time and compete in Saturday night’s Desert Diamond West Valley Casino Phoenix Grand Prix at ISM Raceway.

“If my son was crazy enough to give me a ride, I’d probably be in it Saturday,” he joked on a national teleconference on Wednesday. “But I’ll have to do with that two-seater, which I’m enjoying very much by the way. Quite satisfied with that.” 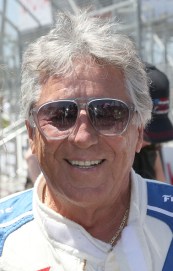 Vasser, who finished third to Andretti in that memorable 1993 race at PIR was literally just beginning his IndyCar career (started in 1992) as Andretti was closing in on the end of his own career (he’d retire at the end of the 1994 seas

Vasser recalls what it was like to not only race a living legend, but also just to hang out with one of the sport’s most popular drivers ever.

“Wow. I mean, we don’t have enough time to talk about all the things,” Vasser said on Wednesday’s teleconference. “Everybody looks up to Mario. The biggest thing, he’s the king of cool, like Steve McQueen or something for me.”

Unser Jr. told The Arizona Republic recently what Andretti meant to both him and the sport, back in the day as well as today.

“When Mario walks into a room, his aura walks in first,” Unser Jr. told the Republic.

Unser Jr. is back in the IndyCar world as a consultant to Harding Racing, making its first full-time foray into the sport this season. He saw first-hand less than a month ago in the season-opening race weekend at St. Petersburg, Florida, just how beloved Andretti still is to fans.

“I was walking through the crowd, and all of the sudden I hear this big roar and cheer,” Unser Jr. said. “And who goes by me on a scooter? It’s Mario.”

Andretti’s final win in 1993 was prototypical of his entire career: never give up, try to get yourself in contention and be ready to quickly jump at an opportunity as soon as it arises.

During Wednesday’s teleconference, Andretti recalled how he came to win his last IndyCar race in the No. 6 Newman Haas Racing Kmart/Texaco Havoline Lola Ford.

“Well, I recall it was a little bit of a nice little gift to some degree because I was probably at that point (late in the race) running third,” he said. “I started on pole in that race, I think (actually, he started second).

“I led at the beginning a little bit (first 10 laps), but then the Penske cars seemed to be on a planet of their own. They were running 1-2.

“Then 10 laps later (Lap 171, after leading the prior 10 laps), Emerson Fittipaldi did the same thing.

“All of a sudden here I’m leading the race. I figure how sweet this is. I saw both guys walk away. That was it.

“But it was certainly welcomed, as you can imagine.”

All told at PIR, Andretti compiled an outstanding record over 30 years:

“When I look back, it just brings back very, very special memories.”

NOTE: Tune in to tonight’s special post-dinner tribute to Mario Andretti, who will be joined by several of his former competitors, at 10:30 p.m. ET on IndyCar.com.