Bourdais and his Dale Coyne Racing with Vasser-Sullivan Honda roared past Pagenaud to grab the top spot with a 188.539 mph effort.

“It’s high tension, high pressure, you don’t breathe very much, you’re just listening to the car to make sure you don’t overdo it,” Bourdais said of his run to NBCSN. “I think it’s a great achievement for the entire team. … It’s racing, man, you’re only as good as your ride, and those guys gave me a car.”

Team co-owner Jimmy Vasser, who earned his first IndyCar pole at ISM Raceway 25 years ago this week, was ecstatic at Bourdais’ run.

“Bourdais is a great champion,” Vasser said. “You get the car the way he wants it on any type of circuit. He’s getting more comfortable all the time on the ovals. It’s a big, long night tomorrow, but great job by the team and it’s just awesome. … It’s a long season but we’re certainly off to a good start.”

Alexander Rossi, winner of the 100th Running of the Indianapolis 500 in 2016, will start Saturday’s race from the fourth position after a qualifying effort of 186.824 mph.

Teammate and rookie Robert Wickens, who was outstanding in his series debut last month at St. Petersburg, was sixth-fastest at 185.362 mph, in what was the first oval track qualifying effort in his career.

One of the biggest disappointing runs had to be that of former champion Scott Dixon, who qualified 17th in the 23-driver field at 181.804 mph.

There is one more on-track session tonight, with practice slated from 11 p.m. to Midnight ET. 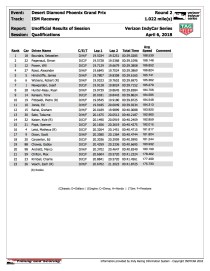