“I didn’t do anything tonight, it was a team victory,” Newgarden told NBCSN. “It was a team effort. They made the right call (for the tires late in the race).

“I was patient all night. I wasn’t forcing it. I struggled with balance in certain parts of the stints. … I knew when it was time to be aggressive was at the end there.”

Ed Jones hit the wall with 21 laps to go (see video below) in the 250-lap race, ending his night and bringing out the final caution that shook up the field for what would become a seven-lap shootout.

After getting fresh rubber with 18 laps to go while under caution from Jones’ wreck, Newgarden took the lead from rookie Robert Wickens with four laps to go and checked out, finishing 2.9946 seconds ahead of Wickens, who was followed by Alexander Rossi, Scott Dixon and Ryan Hunter-Reay.

“I don’t know that I deserved to win the race tonight, but I think the team did,” Newgarden added in his post-race media session. “They did a really good job on strategy, pit stops were unbelievable. I think I gained like five or six positions on just the first stop, which was awesome. They did a great job.

“The tires make a huge difference. I had 50-lap newer tires. With that, with how much he (Wickens)  had to check up in T1, he gave me just enough room. I didn’t have to get crazy high. That one I definitely took risks. I think sometimes you have to do that in the right position, and I think it was the right time to do it tonight.”

It was Newgarden’s first win of 2018, his second consecutive win on a short oval (won late last season at Gateway) and his eighth career IndyCar win. It also was Firestone’s 500th win since returning to IndyCar in 1995.

It was Wickens’ first career race ever on an oval, and to finish second was an outstanding achievement.

“I was just ecstatic to come home P2,” Wickens said. “I tried to defend (Newgarden) the best I could but he just had better grip on fresher tires.”

Rossi was on a rocket ship in the final 25 laps, picking off one car after another to earn a podium finish.

“We deserved to win but it wasn’t meant to be,” Rossi said. “We just need to keep it up and continue this on into Long Beach next weekend.”

The final three drivers were Kyle Kaiser, Will Power and Pietro Fittipaldi. 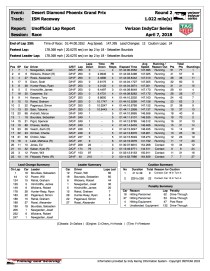 * Bourdais had an issue getting his car started on the pace laps, but finally got going and was able to assume his pole position when the green flag dropped.

* It was an all-France front row to start the race, with Sebastien Bourdais on the pole, alongside countryman Simon Pagenaud.

* Pietro Fittipaldi, grandson of legendary racer Emerson Fittipaldi, brushed the wall on Lap 41, ending his day with a last-place finish in the 23-car field. “We were having a good race, the car was really good, we were running 11th, got past traffic … I went into (turns) 3 and 4, completely lost grip, slid into the marbles and went straight into the wall,” Fittipaldi told NBCSN. “I think we could have had a top 10. I’ll learn from this.”

* Bourdais and Alexander Rossi were both forced to serve pass-through penalties after the caution to Fittipaldi for striking crew members on their team. The crew members were uninjured. Later, on Lap 130, Rossi brushed the wall but continued on.

* Rookie Matheus Leist made a big mistake on Lap 122. He left his pit early before all tires were secured, the left rear tire fell off and the tire rolled down pit lane. He spun the car around so that he could get back to his pit stall, but almost hit an official.

* Canadian drivers, good friends and Schmidt Peterson Motorsports teammates James Hinchcliffe and rookie Robert Wickens took over the top two spots on Lap 130. Hinchcliffe got high on Lap 143 and Wickens snuck by to take the lead.

* Will Power went into the wall on Lap 157 and suffered damage to the right rear that had to be repaired, costing Power a chance at a win. He ultimately finished 22nd.

* Lap 176: Rookie Kyle Kaiser brushed the wall and slowly worked his way to the pits; no caution.

* Bourdais had to give up the lead on Lap 207 to pit for fuel. He had hoped for a caution, but was forced to stop under green, potentially costing him the win.