Alexander Rossi was quickest in the third and final practice of the weekend Saturday morning in preparation for Sunday’s 44th annual Toyota Grand Prix of Long Beach.

After crashing at the end of Friday’s second practice, Takuma Sato was back on-track but was unable to be quicker than 15th (1:07.8120).

Also of note, Robert Wickens, who had strong runs at both St. Petersburg and Phoenix (finished runner-up), was 14th quickest (1:07.6474).

.@ToyotaGPLB today is qualifying for @IndyCar. Tune in tonight at 3:30PT/6:30ET to watch the action unfold! pic.twitter.com/zJIh73xEuX 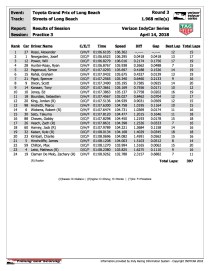 There were a few incidents in the final practice session:

* Zack Veach spun about six minutes into the session but was able to get going under his own power. Veach also almost hit the Turn 6 wall in the final minute and a half.

* With about 33 minutes remaining in the session, Zachary Claman De Melo stopped on the track with an apparent electrical system, bringing out a red flag.

* With about three minutes left in the session, Tony Kanaan got loose coming out of Turn 5 and just barely missed sliding into the wall. He was able to continue.

* Matheus Leist went into the run-off area in Turn 9 in the final minute of the session.

* With just about 40 seconds remaining, Jordan King plowed into the tire wall in Turn 8. He was uninjured, but the left front of his car suffered moderate damage.

REPLAY: This incident involving @42jordanking brought out a red flag/checkered to finish Practice 3.❌