Alexander Rossi and his NAPA Honda dominated from start to finish to win Sunday’s Toyota Grand Prix of Long Beach.

Starting from the pole, Rossi led 71 of the 85 laps to earn his first win of 2018 and the third of his career, behind the 2016 Indianapolis 500 and Watkins Glen last season.

“I can’t really put into words how good the car was all weekend,” Rossi told NBCSN. “I think we proved that and I’m just so glad we were able to capitalize on that and nothing crazy happened.

“When the car’s that good, I don’t have to work so hard.” 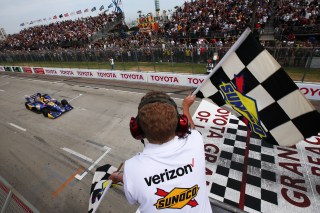 Rossi, who won in his home state (he’s a native of Auburn, California, near Sacramento), finished with an average speed of 88.622 mph, taking the checkered flag with a 1.2413 second margin over runner-up Will Power.

“This is kind of like our second home race (Sonoma is his first home track),” Rossi said. “We had a lot of people here. It was really cool to be able to get them the result.

“They didn’t get to see me race in Europe, so the fact they’re here and we were able to get redemption on last year (engine failure relegated him to a 19th-place finish at Long Beach) is really special. I’m really happy.”

Rossi also takes a 22-point lead atop the Verizon IndyCar Series standings with his win.

Power gave the strongest challenge of any driver in the race to Rossi, using push-to-pass several times in the last 10 laps, but could not get enough to pass Rossi.

“They were definitely very good,” Power said. “That was absolutely driving as hard as I could go, and I’m sure that was as hard as (Rossi) could go, too.”

It was Jones’ second podium in his brief IndyCar career. He finished third in last year’s Indianapolis 500.

“It’s great to be back up on the podium,” Jones told NBCSN. “Hopefully, this is the start of many.

“Long Beach has been good to me. I won here in Indy Lights, was sixth in IndyCar last year and third today. It’s been a good track for me and hopefully next year it’ll be a win for me.” 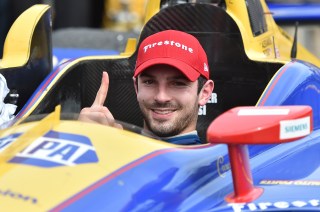 Veach was the highest-finishing rookie with his best IndyCar finish, including his first top-five and top-10.

“I’m just so thankful, this feels like a win,” Veach told NBCSN. “Our qualifying pace hasn’t been what we want it to be. It’s just putting that lap together is so tough in these things. I feel like once we got into the race, things started to flow our way.

“To be fourth in my fifth ever IndyCar race; hopefully we can get on the podium at Barber (next race, April 22) and keep going up from there.” 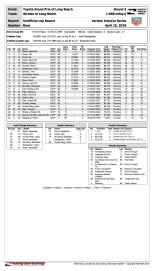 * On the first lap, heading into Turn 1, Graham Rahal got into the rear of Simon Pagenaud, appearing to break the rear suspension and ending his day. Rahal was given a drive-through penalty for the incident.

“It seemed like, felt like he never broke,” Pagenaud told NBCSN about Rahal. “It’s a real shame. It could be very costly in the championship.

“I don’t know what else we could have done. It’s on to the next one. I had a car to win the race. I don’t think anything is going to solve my pain, so it is what it is.”

Rahal tweeted an apology to Pagenaud after the race:

Before all the hate messages get read, I apologize to @simonpagenaud. I hate that for anyone, but for sure one of my closer friends in the paddock. Sorry Pag!

* Ryan Hunter-Reay also got some residual damage after his right front wing clipped the left rear tire of Scott Dixon when the field bunched together to avoid Pagenaud and Rahal. Hunter-Reay came back into the pits on the following lap to change the front wing.

Later, on Lap 47, Hunter-Reay suffered a flat left rear tie after touching tires with Jordan King. He was forced to pull aside and let the field go past as he limped his way to pit road.

Here was the problem for RHR. Flat tire, bent wheel and an extra pit stop for the 28 drops RHR yet again. #IndyCar #TGPLB pic.twitter.com/FOpXZAX2dL

* Robert Wickens, who came close to wins in the first two races, experienced gearbox problems after 25 laps, causing him to pit twice to make repairs, ending his hopes of potentially getting a win today.

* Kyle Kaiser added to his weekend woes when he stopped in Turn 8 on Lap 42. He actually was two laps down at the time of the incident.

* With about 22 laps to go, rookie Jordan King – who was on track for a potential top-five finish – had to pit to bleed the brakes on his car because he was having stopping issues.

* Scott Dixon had worked his way up to second place, but was forced to serve a drive-through penalty for stopping on pit road for service before he was allowed to do so under De Melo’s caution.

* On Lap 71, Sebastien Bourdais, Hunter-Reay, King and Wickens were involved in the fourth caution of the race. King made a rookie mistake by trying to squeeze past Bourdais on the inside of the hairpin turn and spun him, collecting Hunter-Reay and Wickens in the process. Everyone was able to get going except Wickens, who couldn’t get his car restarted.

* With 8 laps to go, Hunter-Reay’s rough weekend continued as he hit the wall, breaking a wing and damaging his suspension.

* Coming into Sunday’s race, there had been different winners in the last six races at Long Beach.

* Scott Pruett, who retired from racing after this year’s Rolex 24 Hours of Daytona, was grand marshal of the race and gave the command to start engines. And true to the form he became famous for in his career, he made sure to say “hi to my family back home” before giving the command.

* While this was the 44th Toyota Grand Prix of Long Beach, it was the first without legendary racer Dan Gurney, who passed away in January at the age of 86. Gurney and promoter Chris Pook joined forces in 1973 to convince Long Beach officials to hold a race on the city’s streets along its ocean side. The Long Beach GP has gone on to be arguably the second most-popular IndyCar race in the U.S., next to the Indianapolis 500.