Polesitter Alexander Rossi continued to have the car to beat in Sunday morning’s final practice for the 44th Toyota Grand Prix of Long Beach.

There was two incidents of note in the 30-minute practice:

* Gabby Chaves ran into a run-off area in Turn 9 with about six minutes remaining, bringing out a brief red flag practice stoppage.

* With about one minute left, Zachary Clemen De Melo also carried into the same run-off area in Turn 9, bringing out the red flag and ending the session.

* Al Unser Jr. is the all-time leader in wins at Long Beach with six visits to victory lane.

* From a team perspective, three organizations are tied for most wins at Long Beach, with six each: Chip Ganassi Racing, Team Penske and the former Newman-Haas Racing.

* But with Rossi and Andretti Autosport looking so strong this weekend, including Rossi starting today’s race on the pole, will Ganassi or Penske finally be able to break that record — or will they have to wait again until next year? 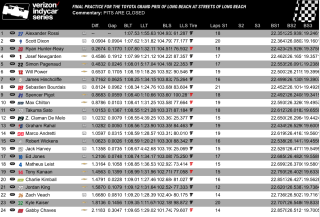