You’ve heard of the Fast Six in IndyCar, right?

Well, Friday’s second practice session for Sunday’s Honda Grand Prix of Alabama was the Frustrating Five – Turn 5, that is.

It almost might be easier to list those drivers that were not bitten by the cantankerous turn on the 2.3-mile Barber Motorsports Park layout in Birmingham, Alabama.

Close to 10 drivers in the 23-driver field suffered issues in the turn, ranging from running off the grass and back on, to getting stuck and having to be towed out, to suffering damage.

But by the time the one-hour session was over, Josef Newgarden took a big step towards defending his win from last year’s race there, being fastest in Friday’s second of two practice sessions. 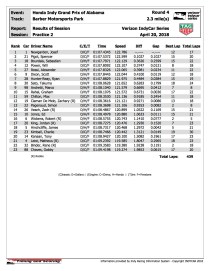 Now, speaking of all the incidents, here’s a list.

But that wasn’t all, as Sebastien Bourdais followed in almost the same spot with a spin of his own roughly a minute later, and then Gabby Chaves also had his problems in the same turn, going into the grass but avoiding the gravel.

* Simon Pagenaud joined his Penske Racing teammate Josef Newgarden in the Turn 5 gravel. Newgarden spun into the gravel in the first practice session.

* Rookie Rene Binder, who has struggled in his inaugural season, continued to have issues, running into the wall and causing damage to the front end, needing a tow truck to get him righted.

It appeared Binder snapped part of the front suspension in the incident.

* Turn 5 saw James Hinchcliffe and Tony Kanaan run off-track late in the session, but they were able to continue.