Will Power was fastest in Friday’s first of two IndyCar practice sessions at Barber Motorsports Park. 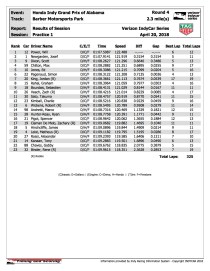 * Early in the session, Long Beach winner Alexander Rossi ran off the track and into the grass, striking a small sign, but was able to get back on-track. However, Rossi was only able to complete 10 laps, relegating him to 20th-fastest in the 23-car field.

* Moments later, it appeared the rear brakes locked up on Newgarden heading into Turn 5, spinning him into the gravel trap. He was able to get going and returned to the pits for service and was back on-track with less than four minutes remaining in the session.