With time running off the clock, Josef Newgarden lapped Barber Motorsports Park with a speed of 122.773 mph to win his third career pole and first on this track in the Honda Indy Grand Prix of Alabama.

Newgarden was .0128 seconds faster than teammate Will Power in second.

Newgarden has two previous wins at Barber. He won last year’s edition of this race after starting seventh and in 2015 from fifth.

“I didn’t know if that was going to be enough,” Newgarden said after winning the pole.

“Team Chevy has done a good job,” Newgarden said. “They’ve really given us good power this weekend – good driveability. We’re going to need some fuel mileage tomorrow, which I think we’ll have. But it’s going to get mixed up with the rain.”

“I’m sure you could pick out a number of different things on a lap when it’s that close,” Power said about what made the slight difference between him and Newgarden. “A little mistake out of 9; a little lift here or there.”

Scott Dixon was the last driver in the top six.

He brought Power, James Hinchcliffe, Scott Dixon, Ryan Hunter-Reay, and Sebastien Bourdais along with him to the Fast 6.

Newgarden posted the fastest single lap in round one, group one of qualification for the Grand Prix of Alabama with a speed of 122.550 mph.

Hunter-Reay, Hinchcliffe, Wickens, and Andretti also advance to the fast 12.

Taking the final slot was Jones with a speed of 119.835 mph after an off-course excursion in final practice.

This was Andretti’s first advancement to the fast 12 since 2014.

Scott Dixon had an uncharacteristically slow lap of 121.006, but managed to advance to the fast 12 when the session was red-flagged for an incident involving Tony Kanaan.

With three minutes remaining, Kanaan spun into the tire barriers while leaving pit road. Since he brought out the red flag, he lost his qualification time of 119.996 mph.

Takuma Sato had slipped off-course midway through the session and posted only the Ninth-fastest speed of 120.789 mph.

Results are below. The Honda Indy Grand Prix of Alabama rolls off at 3:00 p.m. ET. 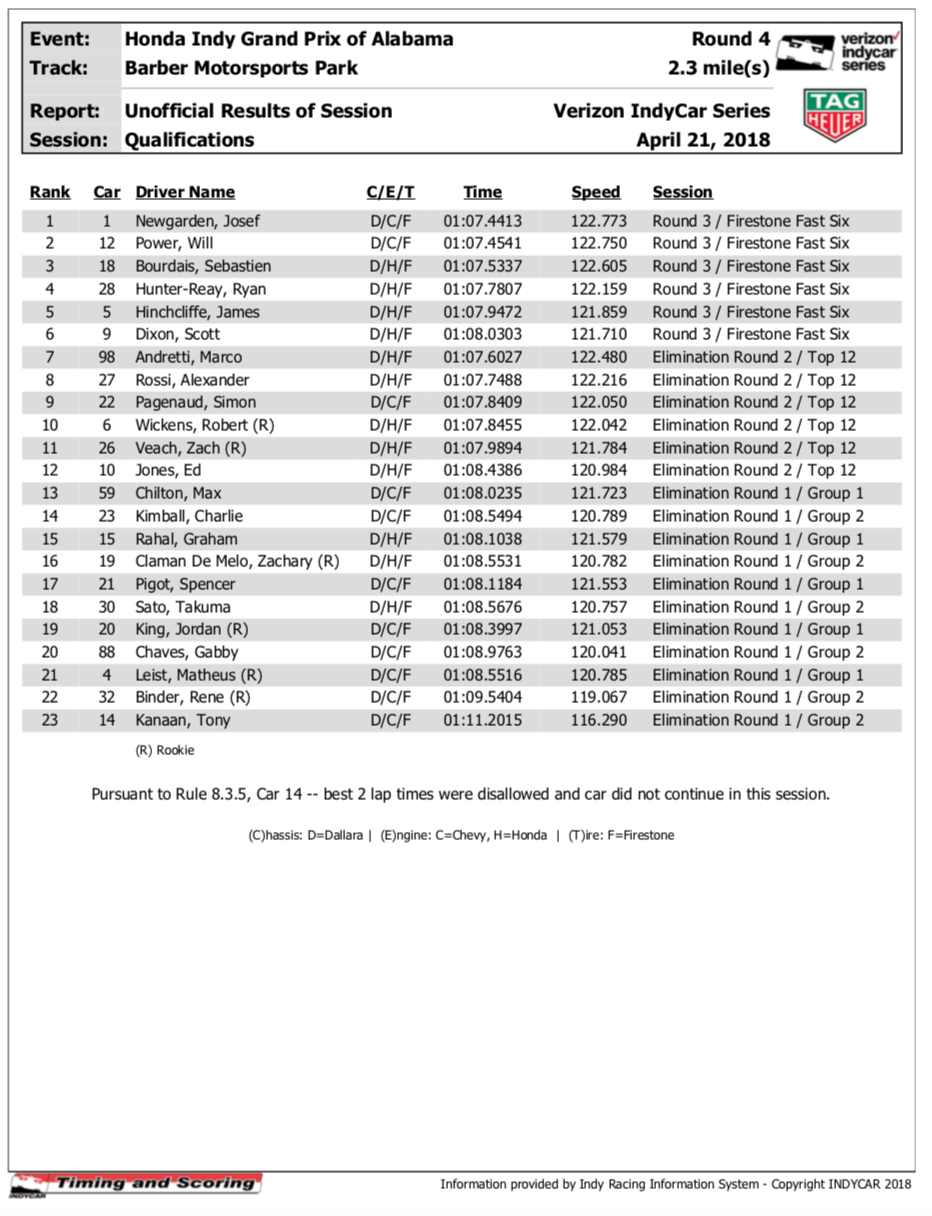