“I like it here,” Newgarden told NBCSN. “We could do the whole series at Barber. That’d be great.”

Newgarden won his ninth career IndyCar race on what he considers his home track, just three hours from his home north of Nashville, Tennessee.

Monday’s race on the 2.3-mile, 17-turn permanent road course was a timed event of 75 minutes after Sunday’s rain-postponement after 22 laps of the scheduled 90 laps.

As it turned out, both ends of Sunday’s start and Monday’s finish, a total of 82 laps were contested.

Rain once again became an issue in about the last 15 minutes of Monday’s rescheduled event but Newgarden – who started from the pole – made a stop for rain tires with 14 minutes left and that proved to be the winning strategy. He also regains the lead in the IndyCar point standings from Long Beach winner Alexander Rossi.

“The rain made it more eventful than I would have liked,” Newgarden told NBCSN. “We had good fuel mileage and good reliability, that’s what we needed to win this race.

“It seemed like smooth sailing for the most part — we had no yellows, which we were hoping for no yellows — and then the rain crept in. … Fortunately, we had a big gap, which helped us win the race, just building that gap over the beginning part. … It’s a great day for Team Penske.”

“Solid weekend for us,” Hinchcliffe said. “Two cars in the top 10 in qualifying and two cars in the top 5 in the race. Pretty proud of these boys. It’s good to get a couple Hondas up there. Maybe not the top steps in the podium, but we took the rest of it.”

Bourdais had hoped to finish the race on slicks and win. But he was forced to pit with 7:15 left after his car became too difficult to control in heavy rain, swapping to rain tires.

“We were in the catbird’s seat for second and were hoping that he’d get some good times on the drives in the wet, but the wet just kept coming and we had to bring him in,” team owner Dale Coyne said.

Added Bourdais, “We’re in it to win it, did everything we could, it was seemingly going to be good enough. … I think we had beaten (Newgarden). Yet, the sky opened and that was it.”

Rounding out the final three finishing positions were Will Power, Max Chilton and Charlie Kimball. 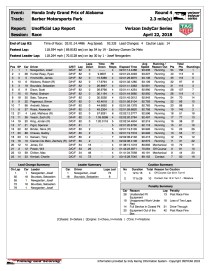 * Spencer Pigot and rookie Zach Claman De Melo got into a tangle early on, but both were able to get going and damage appeared minimal.

* Will Power’s team was able to get his damaged car repaired and he was back on-track roughly 10 minutes into Monday’s action.

* Scott Dixon lost much of the electronics on his car with about 28 minutes left. He essentially had to handle things old school, going by feel. He wound up being penalized for speeding on pit road when his dashboard went out.