Talk about delivering return on investment to your sponsors: It was an Acura sweep in the Acura Sports Car Challenge Sunday at Mid-Ohio Sports Car Course.

“We come here in Acura’s for Acura’s home race and then to start the month of May with a legend (teammate Helio Castroneves), it’s just the start,” Taylor told Fox Sports 2.

Added Castroneves, in his first season in the series, “This kid (Taylor) is unbelievable. He was on it and never lost his cool. Unbelievable. I was losing my cool, it’s the hardest thing to watch.”

Taylor then predicted even more success for Castroneves, who races next in a one-off start in the Verizon IndyCar Series in the May 27th 102nd running of the Indianapolis 500 at Indianapolis Motor Speedway.

“He’s got more coming up in the month,” Taylor said of Castroneves on FS2.

So @h3lio may be quick on track but he was slow on the champagne. He never stood a chance from @RickyTaylorRace @danecameron19 and @jpmontoya! 🍾🍾🍾 pic.twitter.com/9bCWlV7p4u

As for runner-up Montoya, he told FS2, “You’ve got to be happy for Acura. We’ve worked so hard and we’ve been so unlucky this year. To win here on their home turf (Acura has a manufacturing shop in Marysville, Ohio, about an hour away from Mid-Ohio) and do it 1-2 is pretty cool.”

The weekend also marked the return to Mid-Ohio for the IMSA WeatherTech Championship Series after a five-year absence.

Taylor’s No. 7 Acura DPi crossed the finish line 8.464 seconds ahead of Montoya in the No. 6 Acura DPi, while Tristan Nunez, in the No. 77 Mazda DPi finished third, 18.310 seconds behind Taylor.

While there was some minor contact between several cars across all three classes, the entire 2 hour, 40 minute race was run completely caution-free under sunny conditions and temperatures in the 70s, a distinct improvement from Friday, when rain deluged the track.

“It was horrible,” Vanthoor laughed to FS2. “The BMW (of De Phillippi) was chasing us with fresher tires and my tires were already destroyed with 15 laps to go, so I had to fight like crazy to stay on track and push.

“I was worried that cars were catching me. I was doing my best and tried to keep positive and finally it worked. A lot of stuff went wrong along in-between, chances that went away, but now it’s done and I hope it’s the first of many.”

“The radio connection was not too good, so I had to manage it myself,” Baumann said to FS2. “But I pushed every lap. It was just 100 percent every lap.

“I didn’t know what the gap was, but I’m so glad we did it. The pressure’s going off and it was such a perfect weekend.”

The next IMSA WeatherTech SportsCar championship race will be held on the weekend of June 1-3 as part of the Chevrolet Detroit Grand Prix on the Belle Isle street course. 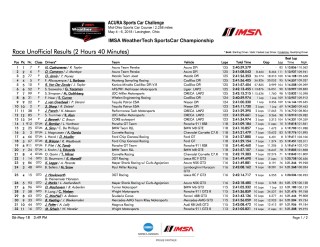 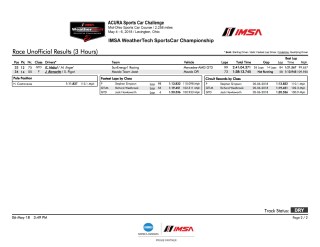