A derivative of a famous name that was synonymous with the Indianapolis 500 more than a century ago – the Stutz Motor Company, which produced the renowned Bearcat model – will once again be part of the Greatest Spectacle In Racing for this year’s race.

The Stutz Business and Arts Center, which is housed within the original Stutz Motor Company factory in Indianapolis, will serve as associate sponsor for the Schmidt Peterson Motorsports Hondas of James Hinchcliffe and Robert Wickens in the May 27th classic at Indianapolis Motor Speedway. 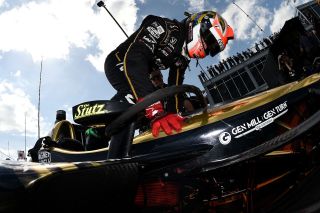 The associate sponsorship will also continue through the remainder of the Verizon IndyCar Series season.

“May is such a special time in Indianapolis and I couldn’t imagine spending the month anywhere but watching all the pageantry, events and racing at the Indianapolis Motor Speedway,” said Turner Woodard, owner of The Stutz and its holding company, Turner James Investments. “We value the business operation side of racing, so we’re pleased to lend our support to the Schmidt Peterson Motorsports team.

“They are an exciting and dedicated team. We’re also thrilled to see the Stutz brand and it’s rich motor racing heritage back at the Indianapolis Motor Speedway where it first broke onto the scene in 1911.”

“To affiliate with an organization that has an Indianapolis 500 history dating back to 1911 is an absolute honor.  We are excited to extend our relationship and are so pleased to have their support for this team.”