Indianapolis Motor Speedway is open and the first practice for the May 27 102nd Running of the Indianapolis 500 is in the books.

Rain briefly interrupted the two-hour session, which ran from 11 a.m. to 1 p.m. ET, but cars were back on track in short order once the surface dried and was inspected.

Team Penske dominated the first session with Simon Pagenaud, still searching for his first Indy 500 victory, having the fastest lap at 225.787 mph.

Helio Castroneves, hoping to earn his fourth career Indy 500 victory, which would tie him for most triumphs at the Brickyard with Al Unser, A.J. Foyt and Rick Mears, was second-fastest at 223.445 mph.

A total of 25 of the 35 drivers entered in the 500 took to the track for the first session. 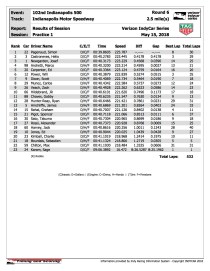 Then, from 1 to 3 p.m. ET, there was a two-hour session for Stefan Wilson, Pippa Mann, James Davison, Oriol Servia to undergo refresher sessions, and Zachary Claman Demelo – who earlier in the day was named to replace the injured Pietro Fittipaldi in the 500 – to complete his Rookie Orientation Program. 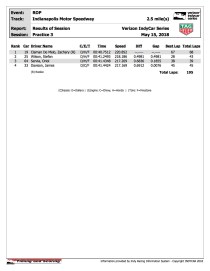 Rain is in the forecast for this afternoon, which could impact the third and final practice of the day, which is slated to run from 3 to 6 p.m. ET. In addition to veteran drivers, others expected to take to the track for the first time include Danica Patrick, Robert Wickens, Jay Howard, Sage Karam, Matheus Leist and Kyle Kaiser.