A day earlier, Rahal struggled during the second full day of practice for the May 27 Indianapolis 500 at Indianapolis Motor Speedway.

He was the 34th fastest (222.102 mph) in the 35-driver field that will attempt to qualify this weekend for the Greatest Spectacle In Racing.

But on Thursday, it was as if the clouds parted and sunshine rained down on Rahal and the Rahal Letterman Lanigan Racing team, as the younger Rahal turned in Thursday’s fastest speed at 226.047 mph in his Honda.

“Today was definitely a better day for sure,” Rahal said. “From the get-go, I knew that yesterday (Wednesday) we didn’t put in any effort to actually put in a decent lap. I found myself all day yesterday in the middle of the pack. It’s impossible to put up a number from that position. So there was a lot of reason and motivation to go and try to put together a decent one today. It was a solid run.

“Today was definitely a good day for us overall just to make a huge step forward in a lot of phases of it. We can all rest a little bit easier.” 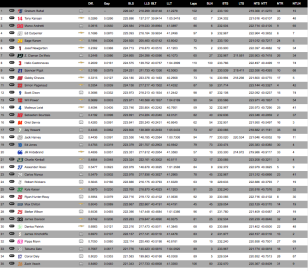 From an overall standpoint of the first three days and four practice rounds completed so far this week, Andretti remains the fastest driver thanks to Wednesday’s top speed of 227.053 mph. 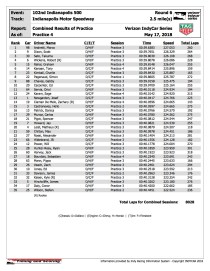 However, teams will be closely watching the skies the next three days, as various forecasts call for the chance of rain between 80 and 100 percent Friday, Saturday and Sunday.

Also of note Thursday, the first contact of the week, which also brought out the first non-track inspection yellow caution flag of the week, occurred in the final half-hour of the session.