Ed Carpenter, the king of the front row at Indianapolis Motor Speedway, reigned supreme again Sunday, taking the pole for next Sunday’s 102nd Running of the Indianapolis 500.

It’s the third time Carpenter — appropriately nicknamed by some as “Fast Ed” — has started the 500 from the top spot, having also done so in 2013 and 2014, along with starting second in last year’s race.

Carpenter led off with the fastest one-lap speed of the day at 230.088 mph – the only driver over 230 mph – and continued on to accumulate a four-lap average speed of 229.618 mph, nearly a full mph faster than Simon Pagenaud (228.761 mph), who will start second and in the middle of the front row.

Will Power (228.607 mph) will start on the outside of the front row. Team Penske grabbed second through fourth and also the eighth position.

The first driver of the Fast Nine to take the track, Danica Patrick – who will make the final start of her multi-faceted racing career in the 500 – qualified seventh with a four-lap average of 228.584 mph.

Here’s how the first three rows stack up (inside driver, middle driver, outside driver):

Here’s comments from the Fast Nine:

Simon Pagenaud (228.761 mph, 2nd): “We have good cars, fast cars and I’m just super proud. Obviously, I wanted to get the pole, but it’s racing. Luck is on my side today. We’re in a very good position and I’m thinking positive today.”

Will Power (228.607 mph, 3rd): “Just a couple little bad shifts and little less downforce and it would have been a little closer. It all makes a difference, it all adds up, but that’s Indy for you. You can’t second guess.”

Josef Newgarden (228.405 mph, 4th): “We’re competitive. We want all four of these cars to be up-front. It’s good to be with Chevrolet, they do a lot here at Indianapolis. It was an overall good run, so I’m satisfied. You always feel like you had something to do different after you did it. Hindsight is always 20-20, right?”

Sebastien Bourdais (228.142 mph, 5th): “It was pretty stressful. The car was very much on top of the track, very little downforce conditions. The guys did a good job, gave me a fast car and I really had to wheel it.”

Spencer Pigot (228.107 mph, 6th): “Starting inside the top 9 is a big achievement for us. For me, it’s at least 20 positions better than I’ve ever started here. Now that qualifying is over, we’ll focus on the race. … It’s a massive improvement for me. I like our chances.”

Helio Castroneves (227.859 mph, 8th): “I was praying for rain but it didn’t happen (he said with a laugh). Congrats to Ed (Carpenter). We took a gamble, had nothing to lose here and that’s what we did. It is what it is. Eighth position, we can win the race from there. Now, I’ve got to think about the big number.”

Scott Dixon (227.262 mph, 9th): “We didn’t run this morning so it was following the conditions. We struggled a little and maybe had a couple things that didn’t pay off. We’ll keep trucking on and see ourselves move up next weekend.” 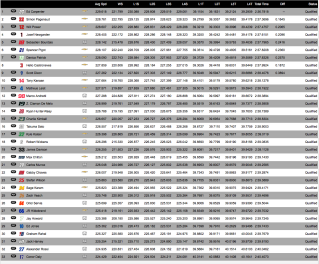 As for qualifying for positions 10th through 33rd:

* 2016 500 winner Alexander Rossi qualified a disappointing 32nd. Rossi had a strong run in the first of his four laps at 227.454 mph, and then suddenly dropped off to 224.152 on the third lap and a very disappointing 221.619 mph on his final lap, plunging him from potentially starting on the fourth row to the last row.

* Another disappointing effort came from Graham Rahal, who will start 30th, on the outside of the 10th row.

Here’s how Rows 4 through 11 lineup look (inside driver, middle driver, outside driver):

Here’s some driver comments on their qualifying efforts:

* Tony Kanaan (10th): “What a great effort as a team. A.J. and Larry (Foyt) put so much effort into this over the winter and gave us everything I’ve asked. They’ve spent every single dime to give us a great car. I told them today our pole was 10, so we’re sitting on the pole.”

* Matheus Leist (11th): “The car was pretty good since the beginning of the week. I’m so happy for the whole team. I love this place. Last year I won my first race in Indy Lights here, so let’s see what I can do in my first Indy 500 here.”

* Marco Andretti (12th): “I thought it was alright. I was chasing balance end to end. It kind of caught me out. … I’m excited about the race, that’s for sure. Yesterday, we wouldn’t have made the Fast Nine, so I just want to go forward and get it done.”

* Ryan Hunter-Reay (14th): “I was hoping for more but I think that’s the speed the car has in it. I had a good balance in the car. I’m looking forward to focusing on the race car tomorrow, and if you have a good race car, none of this qualifying matters.”

* Carlos Munoz (21st): “I want this race, I’ve been so close for so many years. I love this race, everything about the 500. I think the most important thing is to have a good car for the race.”

* Jay Howard (28th): “Obviously, I’m just real happy to have the opportunity to go out there to give the car a good qualification effort. The pace is not there, we’re a little disappointed with the speed, but we’re in the race, that’s the most important thing and we’ll see what (the race) brings us.”

* Alexander Rossi (32nd): “It’s the mystery about this place, we don’t know yet. Certainly, that hasn’t been our performance here. We should have been 10th through 12th, but that’s what makes this place what it is. It’s a new challenge and new opportunity to show what we can do.”