In the second-to-last practice session of the week, Sage Karam paced the 33 drivers qualified for Sunday’s Indianapolis 500 on Monday.

“I ended up P1, which is cool,” Karam said. “I wish I was sitting at the top yesterday (qualifying). Unfortunately not. Got some work to do for the race. But the main goal today was basically just work on the racecar, work on pit stops, because I haven’t done pit stops in a long time, in an IndyCar since last May.

“I think this race is going to be very challenging. I think it’s probably going to be the most challenging Indy 500 in my five, this will be my fifth, that I’ve done. Just going to have to stay focused. I think people are going to make mistakes. It’s just going to be about keeping the car under you, getting perfect pit stops and everything.”

Power and Castroneves ran the most laps of all drivers at 120 and 118, respectively.

Two other Team Penske drivers struggled to get speed out of their cars. Defending Verizon IndyCar Series champion Josef Newgarden was 28th-fastest (221.982 mph) and Simon Pagenaud, who was the slowest (220.902 mph) of the 33 cars on-track. 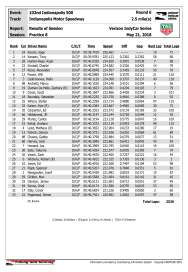 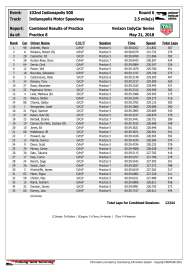 Most drivers were in race trim or were testing things for Sunday’s Greatest Spectacle In Racing such as fuel mileage, chassis setup and more.

Rookie Matheus Leist missed most of the session with an apparent electrical problem that kept him to just 19 laps.

There was one incident of note during the 3 ½ hour session: IndyCar rookie Robert Wickens crashed coming out of Turn 2 during the first hour of practice.

Wickens appeared to skim the outside SAFER Barrier, went left and then violently turned hard back into the outside retaining wall.

The Honda-powered machine for the Canadian driver suffered heavy damage to the right side, particularly the right front tire and the right side of the front end.

There will be no further on-track activity for the Indy cars until Friday’s final practice to fine tune things for Sunday’s 102nd Running of the Indianapolis 500.