Tony Kanaan wants to put legendary driver and team owner A.J. Foyt back into Victory Lane at the Indianapolis 500.

Kanaan took a big step toward achieving that goal in Friday’s final practice for Sunday’s 102nd running of the Greatest Spectacle In Racing.

Kanaan was fastest of the 33-driver field, with a best lap around the 2.5-mile Indianapolis Motor Speedway oval at 227.791 mph, more than 2 mph faster than the second-fastest driver, Kanaan’s former teammate, Scott Dixon (225.684 mph).

“Really, if you haven’t figured it out by today, you’re in trouble,” Kanaan said afterward. “So we just really went through some exercise, gave the boys some pit stops, refueling, trying to gauge your fuel mileage and so on. So this day is always really busy.

“I remember back in the days when we had to save the engine, and you couldn’t do more than 10 laps to save it for the race. Nowadays, the engines are so good, Chevy does such a great job, that you can run full power all the way through. So then you tell the engineers that, we ran three sets of tires, almost more than 50 laps.”

Foyt won a record-tying four Indy 500’s as a driver. It’s been nearly 20 years since he also won as a team owner in 1999 with Kenny Brack behind the wheel.

“I don’t think anybody has more friends than AJ (has) here to be honest,” Kanaan said. “Everybody is an AJ fan here. I mean, I haven’t (had) anybody that approached me that wanted a picture said, ‘Hey, I’m AJ’s friend; hey, I’m AJ’s friend.’ I said, ‘AJ, you have a lot of friends here.’ It’s completely different, and it’s fun. It’s busy at times, but I’m having a blast.”

* Former 500 winner Ryan Hunter-Reay was 26th (221.916 mph), followed by rookie Robert Wickens (221.821 mph), carrying the mantle for Schmidt Peterson Motorsports with James Hinchcliffe having failed to qualify for the race.

Here are the results from Friday’s practice, as well as top overall results from all combined practices since practice and qualifying for the 500 began Tuesday, May 15. 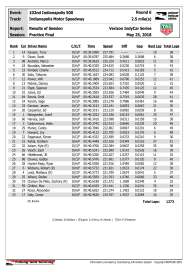 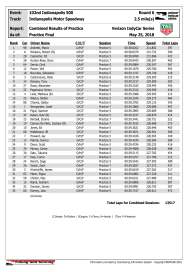