Will Power had so many people and groups to thank after finally winning his first Indianapolis 500 on Sunday, but he missed one group.

With Helio Castroneves embroiled in a federal tax evasion case in late 2008 and early 2009, team owner Roger Penske was in a bind: he needed a substitute to fill in for Castroneves at the 2009 season-opening Verizon IndyCar Series race at St. Petersburg, Florida.

Penske chose Power, who was an available free agent at the time after losing his ride with KV Racing Technology following the previous season.

Power did not disappoint Penske, finishing sixth at St. Pete, just before Castroneves was acquitted of all charges and returned to the seat of his race car at the following event a few weeks later at Long Beach.

But Penske was not about to let Power be a one-and-done stand-in.

“If you remember back to the situation that Helio had there, Will honestly wasn’t on our radar screen,” Cindric admitted. “I talked to him a little bit before, but we didn’t really have a spot.

“It was obvious Helio wasn’t going to be there for the first race in St. Pete. Roger and I, we made a short list of kind of who might be the right one for that situation. But with Helio, we weren’t sure how that was all going to turn out. I don’t know anybody was.

“He was a team player from the very beginning. He did a great job. Should have won St. Pete. I remember being on his pit box. He was running the Marlboro car at the time. We ran the session, he was P1. Helio had just been cleared. I said, ‘Do you want the good news or the bad news?’

“(Power said at the time) what’s that?

“Well, you’re P1 and you’re getting out of this car after this session, we have another car for you. At that point Roger told him, that night, ‘Hey, no matter what happens, you have a ride at the Indy 500.’ Verizon stood behind him. They were really a big part of his career, going to another level when he signed with us, and he took it from there with his talent.”

Power did not disappoint in Penske’s and Cindric’s faith in him, finishing second in the subsequent races at Long Beach, fifth in his first Indy 500, third at Toronto, won at Edmonton and was ninth at Kentucky.

That helped earn him a full-time contract for 2010, and he’s been one of the most successful drivers at Team Penske since. In fact, 31 of Power’s 34 career IndyCar triumphs have come for Team Penske.

And the biggest win of all, Sunday’s 500 triumph, wasn’t just Power’s biggest, but also extended one of the most dominant marks in motorsports history, giving Penske his 17th win in the 500, Team Penske’s first since Juan Pablo Montoya earned his second 500 win in 2015.

“My career, I’ve had so many wins and so many poles,” Power said. “I was wondering if I would ever win it.”

Now that he has, for the next year, Power will be the reigning Indy 500 champion. It’s something that he worked so hard for, and for so many years, but now is something he’ll never have to wait for again – nor will it be something anyone can ever take away from him for the rest of his life.

“Man, it’s what I needed so badly, what I wanted so badly, and it came true,” Power said. “When you go into Penske (headquarters), you see all the baby Borgs (miniature versions of the Borg-Warner Trophy for winning the Indy 500) there in the foyer.

“In the IndyCar shop, you see all the pictures of those that have won (the 500). I’ve looked at that often and wanted to be up there. Yeah, it’s going to be pretty cool to walk in that shop and see yourself up there in Victory Lane from the Indy 500. Pretty cool.”

Power has long been known as one of the most laid-back, reserved guys in IndyCar racing. Given that so many fans call Scott Dixon “the Ice Man” for being so cool under pressure, Power should be called “Mr. Freeze” for an even cooler and colder all-business demeanor.

With his 34 wins, Power is one of IndyCar’s winningest drivers and also has an incredible 51 career pole positions, something he could easily brag about.

But the 37-year-old Aussie has never been the kind of guy to call attention to himself, never boasted or bragged, was always a family man first and racer second.

He even won the Verizon IndyCar Series championship in 2014. But one thing has historically been lacking, something that continued to grow and gnaw at him more and more with each passing year.

“Will was agonizing during dinner as far as what his setup was, what his gears were going to be. His mind never leaves this sport. He’s fully committed. He has made a lot of sacrifices. To see the culmination. I think you saw how excited he was today. You don’t see that out of Will too often. Great day for us and the team.”

Now that Power has finally earned the elusive 500 win, “this closes the book for what he wanted to accomplish in IndyCar: win a championship, now is tied for winning the most races as an Indy driver for the team, and the Indy 500 is something that he wanted to do from the very beginning,” Penske said. “He’s had some ups and downs. Championships slipped away from him, two or three almost in a row. He’s in a different world right now, which is important.”

In a sense, Power and Penske are cut from the same mold personality-wise. Both are stoic, are usually seen with more straight faces than smiles upon them, and are very much tacticians and strategists.

But Sunday’s win made both absolutely giddy, even cracking some great one-liners:

But after the chuckles and smiles, Power returned to his more stoic, serious side when asked if he has finally achieved everything he has ever wanted to accomplish in his racing career. 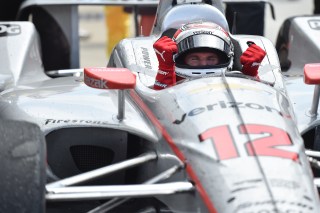 “It runs through my head the last year more than ever because I’ve won so many races and poles, led more laps than anyone,” he said. “I just hadn’t done it here.

“It was the last box to tick, to be considered as a very successful driver. But I’m not done, I’m not done. Like, I still have plenty of time left to win more 500s and championships and races.”

And in a strange, indirect way, Power has the IRS to thank for all of it.

Miguel Oliveira mastered mixed conditions on the Chang International Circuit in Buriram, Thailand to win the MotoGP Thai Grand Prix. Oliveira showed the adaptability as he navigated a race that began in wet conditions and turned dry over the course of the race. Oliveira won the Indonesian GP in similar conditions.

“It was a long race, but I can’t complain,” Oliveira said on CNBC. “Every time we get to ride in the wet, I’m always super-fast. When it started raining, I had flashbacks of Indonesia. I tried to keep my feet on the ground, make a good start and not make mistakes and carry the bike to the end.”

All eyes were on the championship, however. Francesco Bagnaia got a great start to slot into second in Turn 1.

Meanwhile Fabio Quartararo had a disastrous first lap. He lost five positions in the first couple of turns and then rode over the rumble strips and fell back to 17th. At the end of the first lap, Bagnaia had the points’ lead by two. A win would have added to the gain and for a moment, it appeared Bagnaia might assume the lead.

Early leader Marco Bezzecchi was penalized for exceeding track limits, but before that happened, Jack Miller got around Bagnaia and pushed him back to third. Oliveira was not far behind.

After throwing away ninth-place and seven points on the last lap of the Japanese GP last week, Bagnaia did not allow the competition to press him into a mistake. He fell back as far as fourth before retaking the final position on the podium.

“It’s like a win for me, this podium,” Bagnaia. “My first podium in the wet and then there was a mix of conditions, so I’m very happy. I want to thank Jack Miller. Before the race, he gave me a motivational chat.”

Three races to go… see you in Australia 🇦🇺#MotoGP pic.twitter.com/n0WOuHPx9P

Miller led the first half of the Thai Grand Prix before giving up the top spot to Oliveira and then held on to finish second. Coupled with his Japanese GP win, Miller is now fully in the MotoGP championship battle with a 40-point deficit, but he will need a string of results like Bagnaia has put together in recent weeks – and he needs Bagnaia to lose momentum.

Miller’s home Grand Prix in Australia is next up on the calendar in two weeks.

Bagnaia entered the race 18 points behind Quartararo after he failed to score any in Japan. The balance of power has rapidly shifted, however, with Quartararo now failing to earn points in two of the last three rounds. Bagnaia won four consecutive races and finished second in the five races leading up to Japan. His third-place finish in Thailand is now his sixth MotoGP podium in the last seven rounds.

Aleix Espargaro entered the race third in the standings with a 25-point deficit to Quartararo, but was able to close the gap by only five after getting hit with a long-lap penalty for aggressive riding when he pushed Darryn Binder off course during a pass for position. Espargaro finished 11th.

Rain mixed up the Moto2 running order in the MotoGP Thai Grand Prix as well. Starting on a wet track, Somkiat Chantra led the opening lap in his home Grand Prix. He could not hold onto it and crashed one circuit later, but still gave his countrymen a moment of pride by winning the pole.

Half points were awarded as the race went only eight laps before Tony Arbolino crossed under the checkers first with Filip Salac and Aron Canet rounding out the podium.

American Joe Roberts earned another top-10 in eighth with Sean Dylan Kelly finishing just outside the top 10 in 11th.