Sebastien Bourdais was fastest in the first of Friday’s two practice sessions for this weekend’s 2-race Chevrolet Detroit Grand Prix at Belle Island in the Motor City.

Bourdais covered the track with a blistering elapsed time of 1 minute, 17.8545 seconds.

“It’s a lot of fun, definitely a busy track and the walls definitely keep you confined,” Dixon told the IMS Radio Network. “It’s one of the most physically demanding courses, and to double up, by the end of the second race, you definitely feel it.”

Graham Rahal, who won both races at Detroit last year, was third-quickest with a best lap of 1:18.0191.

“The car’s really good,” Rahal told the IMSRN. “We’ve got the quickest car, we just didn’t get the (top) lap there, I think we could get a mid-7. We just have to put it together. … I hope this afternoon (in the second practice), we’ll be able to build on it a little bit.” 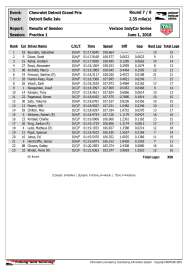 There were several incidents in the session.

Then with just under eight minutes to go in the session, rookie Rene Binder ran into the tire wall in Turn 11, bringing out a red flag practice stoppage. Crews pulled Binder’s car out of the tire wall, he was able to get restarted and slowly worked his way to pit road.

With just over a minute remaining in the session, rookie Robert Wickens went into the run-off area in Turn 7 and could not get restarted.