Ryan Hunter-Reay was quickest of the 23 drivers that took to the Belle Isle street course during Friday’s second practice for this weekend’s two IndyCar races in the Chevrolet Detroit Grand Prix. 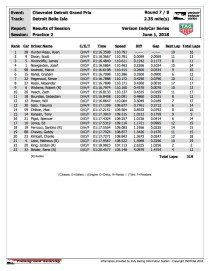 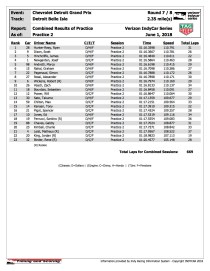 Nine of the top 11 drivers were powered by Honda.

Not surprisingly, the very difficult and worn road course produced a number of incidents during the second session, just like it did in the morning practice.

With about 34 minutes to go in the one-hour session, Jordan King and the No. 20 Chevrolet of Ed Carpenter Racing hit the left side retaining wall entering Turn 13 at full speed, and then shot across the racetrack, striking the right side wall.

📹 REPLAY: @42jordanking took a bumpy ride 😖 after contact with the walls 💥 between Turns 13 and 14 during Practice 2.

“He just said it kind of got away from him in (Turn) 13, it’s unfortunate,” team owner Ed Carpenter told the IMS Radio Network. “It’s a pretty big setback, looks like he got all four corner. This is the last practice before tomorrow’s qualifying and race. It puts us in a tough situation, but we’ve been hear before. We’ll just have to rebound tomorrow.”

Added King, “I just lost the rear, got a bit of a snap on the rear. It really wasn’t even a big thing, but by the time I caught the car, I was too wide, and then the wall is obviously right there. It’s really annoying because it was a tiny error, but it was quite costly.”

At about the same time, Alexander Rossi also scraped the wall in Turn 6.

With less than six minutes left in the session, Tony Kanaan slid into the tire wall in Turn 7, bringing out yet another full course red flag.

Then, in the closing minutes, both Hinchcliffe and Sebastien Bourdais spun in Turn 7, as well.

The race, the first of back-to-back Verizon IndyCar Series events on Saturday and Sunday, starts tomorrow at 3:40 p.m. ET.