Andretti Autosport’s Ryan Hunter-Reay put on a driving clinic in Sunday’s Race 2 of the Chevrolet Dual in Detroit, using a three-stop strategy and a slew of fastest race laps to put himself in position to challenge teammate Alexander Rossi for the win.

Rossi, who used a two-stop strategy, was the dominant driver on the day and led a race-high 46 laps, but Hunter-Reay rapidly closed the gap in the final laps, bringing it down from over seven seconds after his final stop on Lap 53 to be all over Rossi’s gearbox with less than 10 laps to go.

Rossi then started suffering brake lockups in Turn 3, locking up on corner entry with eight laps remaining, and then again with seven laps left.

The second lockup, however, saw his day come completely unraveled, as Rossi was unable to make the corner and he went into the Turn 3 runoff.

Oh no!😧 There goes Rossi’s front left ⚫ tire.@RyanHunterReay to 🥇 P1!

It left Hunter-Reay to cruise to the win by over 11 seconds from Team Penske’s Will Power.

“Today the car was awesome. I mean, it was — we were at times lapping, I think, a second and a half faster than anybody on the track, and that car definitely ended the race where it should be, and that’s in Victory Lane,” Hunter-Reay described in the post-race press conference. “So really proud of the 28 DHL Honda team. These guys have worked really hard, but they gave me a great race car, the engineering side. I’m just really proud of what they’ve done.”

Power, on a two-stop strategy like Rossi, did not appear to have the pace to challenge for a win, but ran a very solid race to improve on Saturday’s seventh-place finish.

“I feel like this was about as good as we could get, give how fast Hunter-Reay was,” Power said afterward. “There was just no way anyone was going to beat him. We just seemed to struggle a little bit on full tanks and cold tires, but very happy with the result. You know, I feel like with what we had, that’s the most that we could have got out of that race, so very happy.”

“We had the pace where we were. Unfortunately we didn’t have enough to get by Will again, but it was a great job by the team the whole weekend. Scott winning the race yesterday and then me on the podium today, we’re just aiming to bring the team forward and have some 1-2s eventually.”

Of note: outside of Hunter-Reay, the rest of the top five used two-stop strategies in Race 2.

Rossi ended up 12th at the checkered flag. Also: Sebastien Bourdais, who ran inside the top five after suffering a cut tire on Lap 1, ended up 21st after spinning in Turn 1 on Lap 38. Bourdais reportedly suffered a damaged toe-link, which caused his spin, and relegated him to a 21st-place finish, three laps off the lead.

In comparison to Race 1, Race 2 was especially chaotic, and it started even before the race began. One of the strangest incidents in recent memory saw the pace car crash just after exiting the pits to start the warm-up laps, and the subsequent cleanup delayed the start by over 30 minutes.

The aforementioned Bourdais also suffered a cut tire in the melee, but a full-course caution limited the damage at the time, as Bourdais was able to pit under yellow.

Racing resumed on Lap 4, with Rossi leading from the pole, and pit stops began on Lap 11, with Wickens, James Hinchcliffe, and most notably Hunter-Reay among those who pitted early, going for a three-stop strategy.

It wasn’t until Lap 21 that the two-stoppers pitted, with Dixon the first to do so of that group. But, things took another twist on Lap 22, when the aforementioned Ferrucci spun exiting the pits and made wall contact, damaging the front wing.

Though Ferrucci got going relatively quickly, several teams thought a caution was imminent. The likes of Rossi, Power, Jones, Bourdais (who charged up to sixth by then), Hinchcliffe, and Josef Newgarden all pitted. For Rossi, Power, Jones, and Bourdais, the timing proved just fine for their strategy. But, Hinchcliffe and Newgarden were on a three-stop strategy, and needed a caution to come out in order to benefit from this extra stop.

No caution flew, and Newgarden and Hinchcliffe never got their track position back – they finished 15th and 16th.

Up front, Wickens and Hunter-Reay ran 1-2, having stopped early. Wickens pitted again on Lap 30, and Hunter-Reay stayed out until Lap 35, setting and resetting fastest laps in the process, and he emerged in sixth after the stop, behind Rossi, Power, Jones, Bourdais, and Dixon.

Hunter-Reay moved up to fifth after Bourdais’ spin, and he quickly closed in on Dixon and co. before they pitted on Lap 47.

Hunter-Reay again stayed out for several laps, and again set a blistering pace that saw him repeatedly reset the fastest race lap with a string of times in the 1:15 bracket, before he made his final stop on Lap 53.

Hunter-Reay emerged in second, behind Rossi, and he quickly closed the gap – it stood at over seven seconds when Hunter-Reay got back on track, and he was on Rossi’s gearbox with eight laps remaining.

Although Rossi’s mistake allowed Hunter-Reay to move into the lead, Hunter-Reay appeared to have the pace to pass Rossi on his own in the final laps.

Regardless, the victory, Hunter-Reay’s first since the 2015 ABC Supply 500 at Pocono Raceway, completed a landmark drive for the former IndyCar champion and Indianapolis 500 winner.

And elated Hunter-Reay celebrated by jumping in the Belle Isle Park fountain, something he promised to do if won on Sunday.

.@RyanHunterReay 🏊‍♂️ is a man of his word.

“(On Saturday) when I had an interview for second, when I was second with the local news, they said, so if you win this thing tomorrow, are you going to jump in? I’m like ‘Yes, I’ll jump in’ I want to win that bad.”

Hunter-Reay also revealed that Sunday’s race ranks up there with the best drivers of his career.

“Definitely pace-wise I think so. Yeah, I think it was — to be that much faster than the rest of the field, yeah. It’s got to be one of my top races. I mean, I’ll always put 2014 Indy 500 as my top one because going back every lap with Helio like that, it’s a different type of race. This one was based on pure speed, not making any mistakes and going fast and jumping in the fountain. 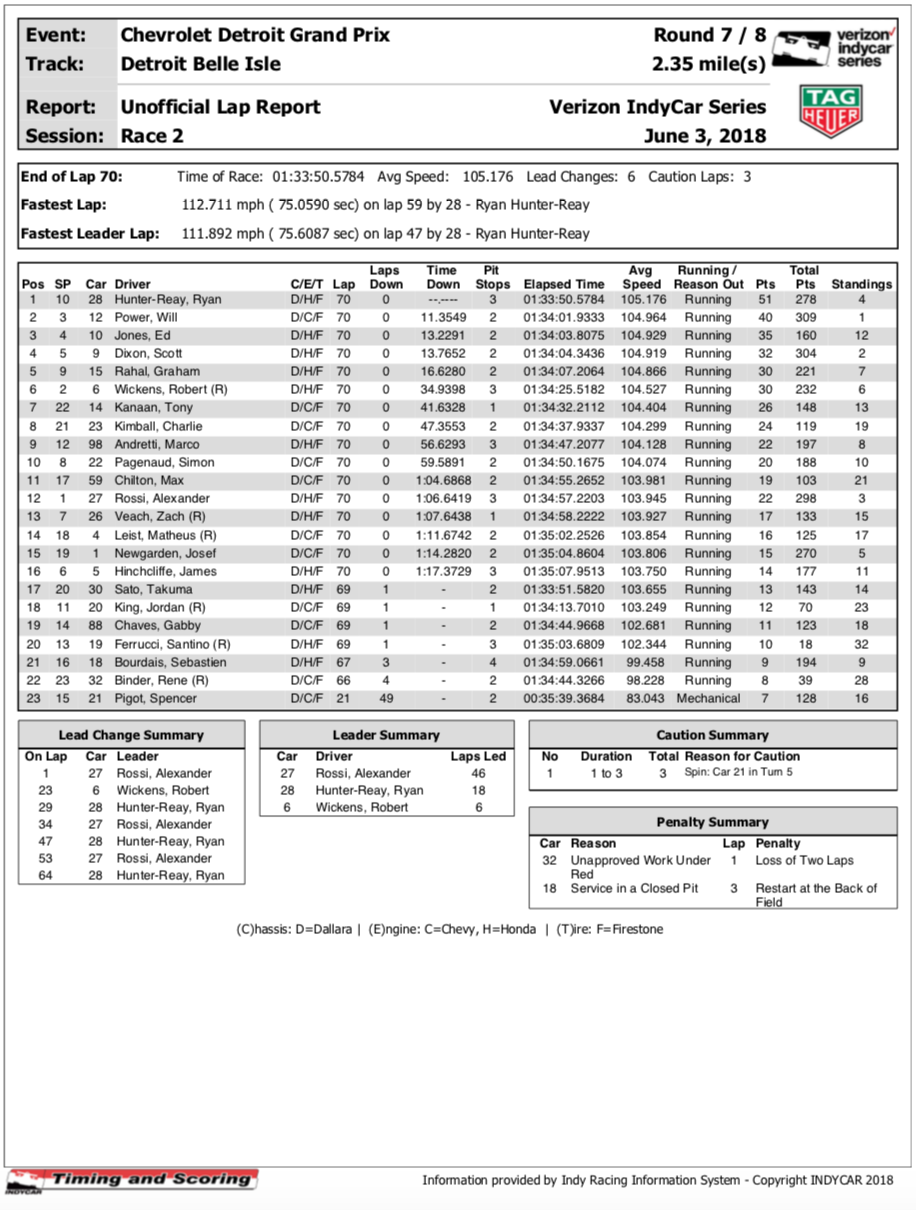 PALM SPRINGS, Calif. – The IndyCar driver known as “The Phoenix” already has taken flight before the 2023 season, and newly licensed pilot Romain Grosjean also got a head start on the opener.

Fulfilling a dream several years in the making, the Andretti Autosport plunged into aviation training over the offseason. Since beginning with online studying last August, Grosjean quickly progressed to earning his licenses for multiengine planes and instrument ratings while completing 115 hours of flight time.

He has landed twice at Albert Whitted Airport, whose primary runway also doubles as the front straightaway on the Firestone Grand Prix of St. Petersburg street course.

“Just to land on the start-finish line, that was pretty cool,” Grosjean said during IndyCar Preseason Content Days ahead of the Feb. 2-3 test at The Thermal Club. “The air traffic control guy was like, “Yeah, left on Acre Five, turn, and then back. I was like, ‘Oh, yeah, that’s the last corner of the racetrack, I’ll take it and go back to the pit lane. He was like, ‘Oh, yeah, yeah, that’s true.’ So it was quite funny.”

Grosjean, 36, said he had wanted to become a pilot since he was 30 but was discouraged by Europe’s complicated and time-consuming licensing process (“to go to ground school twice a week, and with our life, it’s impossible”). He was inspired again last year by (now former) teammate Alexander Rossi, who flew to some 2022 races after earning his license a couple of years ago.

“I thought that was pretty cool,” said Grosjean, who had grown “bored of waiting in the airports.”

He plans to fly to nearly all the races this year (“if the weather is good enough, I’ll be flying”) and jokes about being “commercial by the end of the year, so then I can take Roger (Penske). Roger can pay me to fly him around to races if things go bad with racing.”

Welcome onboard, captain Phoenix taking you for a ride https://t.co/9OhEIfeYiH

Grosjean’s social media has been filled with posts about his new hobby, which afforded him the opportunity recently to take his wife to Key West for lunch from their home in the Miami area. The trip took 37 minutes there and 41 minutes on return and highlighted why Grosjean loves flying: “Freedom. Freedom to go anywhere you want, anytime you want. It’s the beauty of it. We can go to the Bahamas for a day if we want to. Anywhere. I think that’s just great to know that you can do whatever you want.”

It’s reminiscent of the cross-country trip across the Midwest in an RV that Grosjean took with his family during the summer of his 2021 rookie season.

Life in the sky over the Florida keys 😍😍😍#blessed pic.twitter.com/OkRCtIUfEY

“There’s one thing that I told my kids, and I told my friend about America, and for me, that’s the biggest difference between Europe and here, is here everything is possible,” said Grosjean (whose “Phoenix” nickname was derived from a brush with death in his final Formula One start). “If you have the wish, if you give yourself the possibility of doing it, everything is possible. It is different in Europe. Much more boundaries on the way. Much more steps that you need to do in a certain order. But if you want to be extraordinary (in the United States), if you want to do something different, you don’t need to do those steps because you can work through.

“Yeah, I like doing things, and when I do them, I like doing them well. But here I think just the opportunity of driving the RV, flying planes, for my kids to do whatever they want to do, we love that here. Yeah, it’s been the best discovery for us.”

The Swiss-born Frenchman already has flown himself to a race this year, jetting up the Florida coast for his Rolex 24 at Daytona debut last month. It was his debut as a Lamborghini factory driver, and his new deal will continue with the Twelve Hours of Sebring and possibly the Petit Le Mans while he also helps develop the automaker’s new hybrid prototype (LMDh) for next year.

Morning on top of the clouds to get to @DAYTONA
Love flying my Baron #freedom pic.twitter.com/tgB4UCvSCW

Grosjean, who finished a disappointing 13th in the 2022 points standings with one podium for Andretti in his first full season, said IndyCar will remain his priority in 2024.

But he hopes the IndyCar schedule will afford racing in the IMSA WeatherTech SportsCar Championship endurance races and perhaps another his longest plane flight yet — a return to the 24 Hours of Le Mans.

“I’ll keep my fingers crossed like that we get the weekend off from IndyCar,” said Grosjean, noting that 10 IndyCar drivers were in the Rolex 24. “I think it would make a lot of sense. I think for both series it’s amazing. If we can get Le Mans, it’s also amazing because it’s just cool.

“I remember Mario flying across the Atlantic doing Monaco and the Indy 500, and those guys, they were racing everywhere, Formula 3, Formula 2, Formula 1. They were doing the races in opening of the Formula 1 race, and I think that’s very cool for us. So yeah, looking forward to the project. There’s going to be a lot of development coming on. By the time we finish the IndyCar season, the LMDh will be here in the States, and that’s when I’m going to spend a lot of time on it.”

No more waiting time at the airport… pic.twitter.com/IY8xnCH1CJ