While the 16-time NHRA Funny Car champ was hoping that old habit would be the 149th win of his career, it actually was the exact opposite: in the fourth and final qualifying attempt, Force slapped the wall for a third time in the first nine races of the 2018 campaign.

Yet even with the boom and bang, Force somehow still managed to qualify his PEAK Coolant and Motor Oil Chevrolet Camaro SS No. 6 for Sunday’s final eliminations.

Force was racing against daughter Courtney when his car smoked the tires just past the starting line, then about 200 feet down the 1,000-foot dragstrip suddenly veered to the right, slapped the right lane retaining wall and the car erupted into flames, with Force riding it almost all the way to the finish line.

Force said he was uninjured, but then said later in a TV interview that he was going to have his right shoulder examined because it hit the car’s roll bar twice while the car was bouncing along the retaining wall.

Once it came to a stop, Force exited the heavily damaged car under his own power.

“I gave it a quick pedal and it just shot to the right,” Force said. “I kept trying to get it off the wall but it kept pulling me over.

“I think the body might have been on the front tire and that affected the steering. I got it stopped and got out. I am sore but I won’t let this race car beat me up.

“We are going to pull out the back-up car and get to work.” 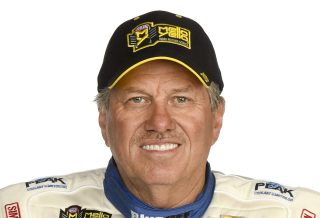 Force began the season with three consecutive motor explosions in as many races. He also got tangled in the parachute cords of Jonnie Lindberg and both slammed into the retaining wall head-on.

Force also failed to qualify for the race in Houston, snapping a string of qualifying for 221 consecutive races.

But even with those mishaps, as well as Saturday’s wild ride – and while he came into this weekend ranked 12th in the Funny Car standings (his worst performance since the 2007 season) – Force has been slowly returning to form.

Including this weekend, he has qualified in the top half of the field four times in nine races, as well as earning a runner-up finish in the Four-Wide Nationals in Charlotte.

“We had some things figured out and that run wasn’t anything like the start of the season,” Force said. “We are making progress with all three of the Chevrolet Camaros.

“Courtney’s hot rod is flying and I ran good yesterday. We are all trying to run fast. You have to out here against this competition.”

Force’s first round opponent in Sunday’s eliminations will be Tim Wilkerson. Force has a 35-19 all-time round record vs. Wilkerson, from downstate Peoria, Illinois.

Force is a three-time winner at Route 66 Raceway, but hasn’t reached victory circle since 2006. His sixth and last final round appearance there was in 2013.