Saturday night’s DXC Technology 600 saw Scott Dixon dominate the second half of the race to take his second win of the 2018 Verizon IndyCar Series season, and his third at Texas Motor Speedway.

Dixon never surrendered the lead on track from there, only losing it during cycles of green flag pit stops, to lead 119 laps and eventually win by over four seconds.

The win is the 43rd of Dixon’s career and breaks a tie between him and Michael Andretti for third on the all-time IndyCar wins list, and vaults him into the championship lead, by 23 points over Alexander Rossi.

“All around great team effort. Everybody at the PNC Bank crew was good. Car setup was obviously phenomenal. Strategy was perfect. So it’s nice to have one of those nights. It’s not too often you get sort of a runaway especially in the series at the moment. It was kind of cool to see for us,” Dixon expressed afterward.

Behind him, Simon Pagenaud, Alexander Rossi, and James Hinchcliffe engaged in a thrilling battle for second in the final laps. Rossi tried several times to pass Pagenaud on the outside entering Turn 1, but never was able to clear Pagenaud, allowing Hinchcliffe to close in as well.

In the end, Pagenaud hung on to finish second – overcoming a tire blistering issue in the process – with Rossi rounding out the podium in third ahead of Hinchcliffe in fourth. Ryan Hunter-Reay completed the top five, finishing fifth.

Pole sitter Josef Newgarden led the opening 60 laps before his first pit stop, but made an unscheduled stop on Lap 97 after suffering tire blisters. Newgarden did get back on the lead lap following a Lap 205 crash, involving Will Power and Zachary Claman De Melo, and ran inside the top 10, but was penalized for jumping a restart with 34 laps left. Newgarden ended up 13th at the end.

The aforementioned Wickens led in the second stint of the race, and looked poised to battle Dixon for the win in the second half of the race. However, his run ended early on Lap 173, as he crashed entering Turn 3 while trying to lap Ed Carpenter.

While tire falloff was somewhat limited – speeds only fell about 3-4 mph over a stint – blistering issues impacted a handful of drivers throughout the race, with the Team Penske drivers appearing to suffer the most issues.

As previously described, Newgarden fell out of contention early on after an unscheduled stop on Lap 97. Teammates Simon Pagenaud and Will Power also battled similar issues, but elected to stay out rather than make unscheduled stops.

After Newgarden led early, Wickens assumed the lead on Lap 97, passing Pagenaud, who cycled into the lead following the initial round of pit stops.

Wickens held the lead until he made his next stop on Lap 127, and ran second behind Dixon when he assumed the lead on Lap 132.

With Dixon sprinting away, Wickens and Rossi battled for second, with Rossi eventually taking second as Wickens got hung up behind lapped traffic.

Wickens’ night then ended on Lap 173, when he and Ed Carpenter crashed in Turn 3. Wickens had been trying to lap Carpenter, but was pinched on the inside entering Turn 3. The two made contact and spun into the outside wall. Carpenter later admitted he was at fault for the incident.

.@edcarpenter20 takes full responsibility for taking out himself and @robertwickens. "That one is on me" says Ed pic.twitter.com/rJqccXQPbJ

The caution was the second incident of the race – Matheus Leist brought out the first yellow on Lap 7 when his No. 4 ABC Supply Chevrolet for A.J. Foyt Racing slowed and caught fire in Turn 3, though Leist managed to quickly jump out of the car before the fire spread.

With the leaders pitting on Lap 178 under the Wickens/Carpenter caution, it left them just outside the fuel window to make it to the finish. However, several drivers, including Hunter-Reay and Graham Rahal, topped off the fuel prior to a Lap 186 restart, and appeared good to make the finish if the race stayed green.

Indeed, they were in fuel conservation mode when racing resumed on Lap 186, but both ran solidly inside the top 10 while doing so, with Hunter-Reay even holding strong inside the top five.

Alas, Power washed up into Claman De Melo exiting the corner, and they both made wall contact on the front straightaway, ending their nights early.

Power also is slated to receive a post-race penalty for avoidable contact, as he was deemed at fault for the incident.

The caution allowed everyone to pit on Lap 210, well within the window to make the finish on fuel.

A restart with 34 laps remaining saw Dixon immediately sprint away from the field, and he cruised home to take the victory, his second in the last three races, ahead of Pagenaud, Rossi, Hinchcliffe, and Hunter-Reay.

For Dixon, the win also is a source of immense pride and accomplishment, as he officially passed Michael Andretti for third on the all-time wins list. And Dixon is quick to admit how privileged and fortunate he feels to be mentioned among the sport’s all-time greats.

“It’s really cool. Obviously I have massive respect for a lot of these drivers. But when you look at those names, A.J. Foyt, Mario Andretti, Michael Andretti, the Unsers, to me it still seems very strange that ‘Dixon’ is on that list, too,” he revealed.

“I feel very privileged and lucky to do what I get to do. I love racing. I love the Verizon IndyCar Series. I think it’s the best racing on the planet, one of the most difficult with all the disciplines. For me, man, I just hope it continues. I hope we can keep a winning style, pick up wins. It’s so difficult right now it’s so competitive.”

Second-place finisher Pagenaud was plenty excited to be back on the podium, his first time there since he won last year’s season-ending GoPro Grand Prix of Sonoma.

“It was fun. I mean, I had a lot of good battles, especially with Alexander at the end. Gave me some gray hair, the last 30 laps. But we managed to hold him off. That was really cool,” Said the 2016 IndyCar champion.

Pagenaud added, “Just to get a good result like this for us, I think the 22 team needed a break. I think we got one tonight. For DXC, it’s pretty awesome. We had about three thousand employees from DXC tonight, so it was good to have a good showing.”

Rossi added that, after his error in Race 2 of the Chevrolet Dual in Detroit, he was keen to ensure he ended up with a podium finish, even if it meant playing things a little safe while battling with Pagenaud.

“After last weekend, there was really no point in taking unnecessary risks,” he explained. “But the NAPA car was good enough to fight Scott probably. I don’t know if we had enough to beat him. But I think we were really good on tire life, ultimate pace. There wasn’t a car I felt less superior to, I guess. A good night for the whole NAPA team and Andretti. Yeah, we’ll just take another podium and focus towards Road America.

Results are below. The Verizon IndyCar Series now takes a weekend off before heading to Road American for the KOHLER Grand Prix (June 24, NBCSN). 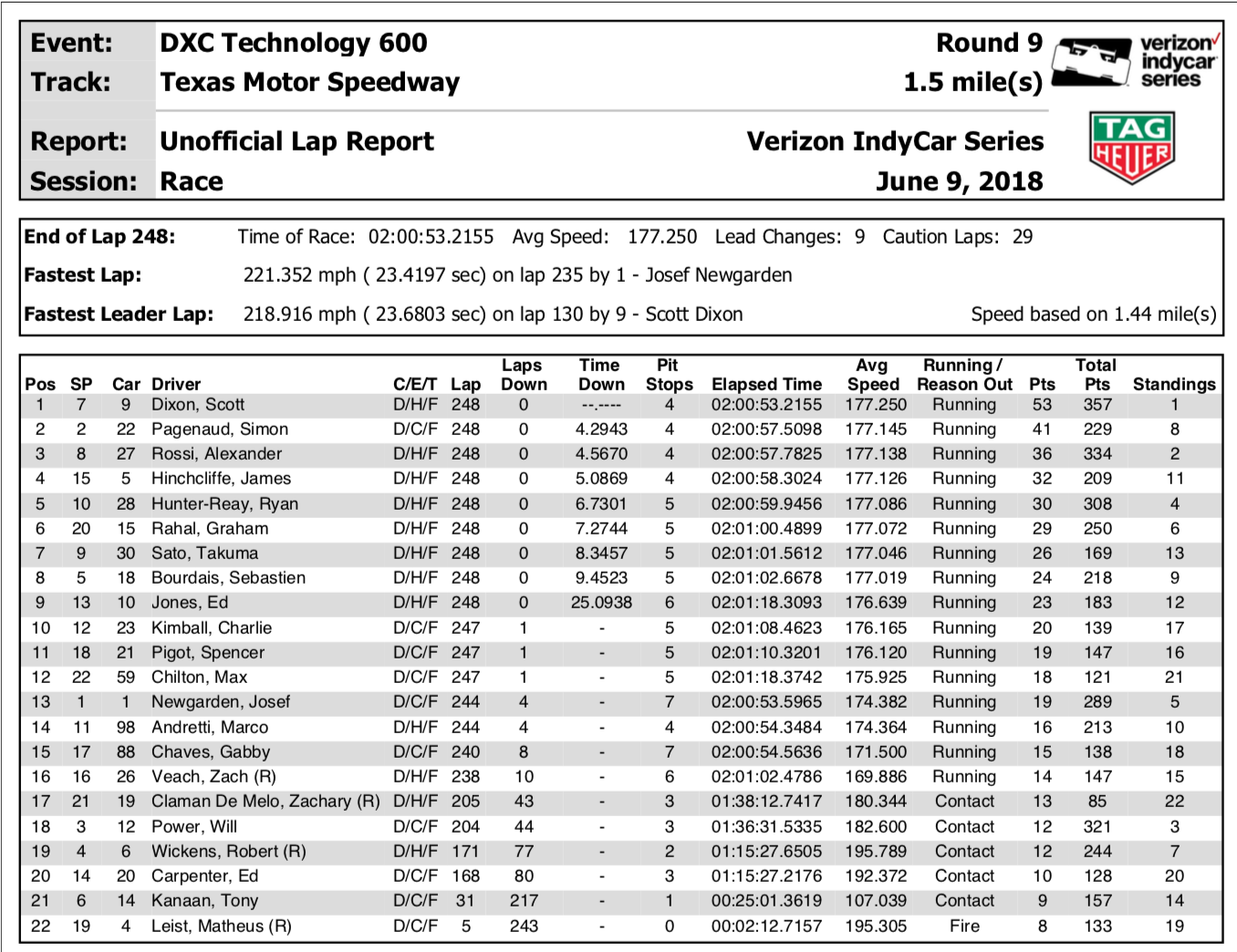