Josef Newgarden continued to be quickest around Road America, first this morning and again this afternoon in the second practice session for Sunday’s KOHLER Grand Prix. 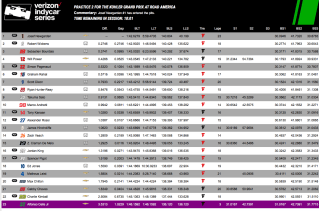 One significant incident of note occurred during the session when Alfonso Celis Jr., making his IndyCar debut this weekend, lost control coming out of a turn and slammed into the tire wall, causing damage to his suspension.

The third and final practice session of the weekend will be Saturday at Noon E.T., followed by qualifying later in the afternoon.

The race will take the green flag on Sunday shortly after 1 p.m. ET. It will be televised live on NBCSN.