A recap of Friday’s MRTI action at Road America is below.

BN Racing’s David Malukas had been fast throughout the first half of the 2018 season, but outside of second and third place efforts in Race 2 at St. Petersburg and Race 1 at Barber Motorsports Park, the 16-year-old native of Chicago didn’t quite have the results to genuinely show how fast he has been.

That all changed on Friday at Road America, as Malukas, who started on the pole, rolled to his first career victory in Pro Mazda, leading all 15 laps along the way.

“When I saw the white flag I was so happy, but I think I made every mistake on that last lap! When I made it to the checkered flag, it was such a good feeling,” said an elated Malukas.

Malukas’ triumph was also noteworthy for the BN Racing team, as teammate Toby Sowery, making his Pro Mazda debut, finished second to make it a BN 1-2.

“It was a tough race but it was a great race for BN Racing,” race winner Malukas added. “I realized it was my teammate behind me, in his first Pro Mazda race, and that was a bit of a relief. I had enough of a gap that I could judge how far back he was on each lap. But having him back there and trying to maintain that gap really helped me keep my focus.”

Harrison Scott rounded out the podium for RP Motorsport Racing, while the battle for fourth proved to be an all-out duel between title combatants Parker Thompson, Rinus VeeKay, and Carlos Cunha.

Thompson, who started second, faded to sixth off the initial start, but made a late charge to catch Cunha and VeeKay in the final laps. He got around Cunha with a handful of laps remaining, and set his eyes on VeeKay. However, Cunha was able to get back around Thompson – the Exclusive Autosport driver ran a little wide exiting Turn 5 in the final laps after trying a pass on VeeKay.

Yet, Thompson regrouped again to get back around Cunha, and made a final-lap pass of VeeKay to finish fourth, leaving the Juncos Racing duo of VeeKay and Cunha to finish fifth and sixth. 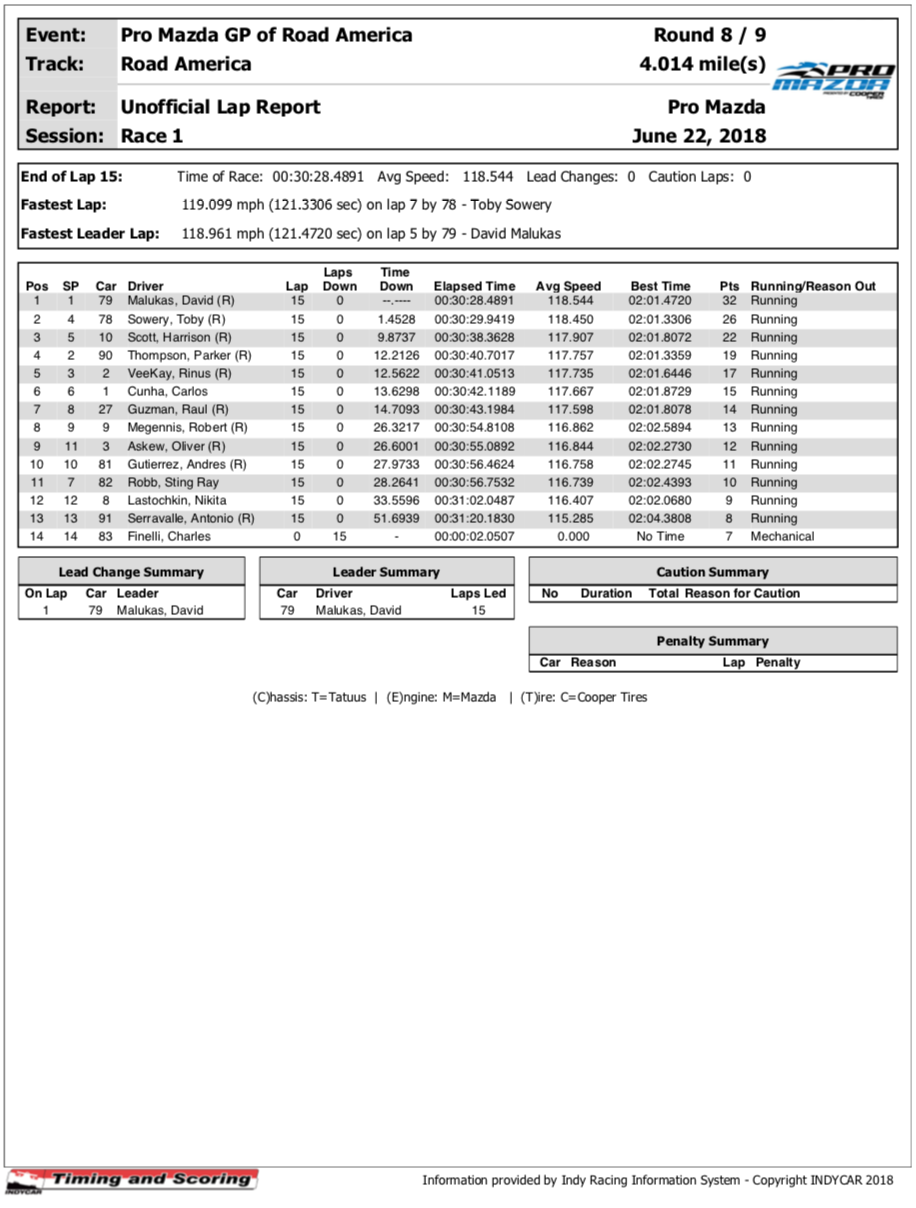 Victor Franzoni and Juncos Racing took an emotional pole position for Race 1 on Friday. Not only is it the first Indy Lights pole for Franzoni, it comes as he and the team race with heavy hearts – Jeff Green, who raced with Juncos in Pro Mazda last year alongside Franzoni, passed away last weekend due to injuries sustained in a crash during a vintage race.

USF2000 ran qualifying sessions for both Race 1 and Race 2 on Friday, and Rasmus Lindh swept them both to the the poles for both races.

In Race 1, Lindh will be flanked on the front row by championship leader Kyle Kirkwood. Calvin Ming, Igor Fraga, and Kaylen Frederick round out the top five. Alex Baron, the second place driver in the championship, languished in 13th.