No. 99 JDC-Miller Motorsports ORECA LPM2 drivers Misha Goikhberg, Chris Miller and Stephen Simpson took the first victory of the season for an LMP2 car and the first since Renger van der Zande and Marc Goossens took the No. 90 Visit Florida Racing Ligier to the win in the penultimate round of the 2017 season at WeatherTech Raceway Laguna Seca.

In the GT Le Mans (GTLM) class, No. 66 Ford GT co-drivers Joey Hand and Dirk Mueller capped off a tremendous weekend at Watkins Glen for Ford Chip Ganassi Racing. And in GT Daytona (GTD), Turner Motorsport took its first Sahlen’s Six Hours of The Glen win since 2014 with the driving trio of Don Yount, Markus Palttala and Dillon Machavern prevailing in the No. 96 BMW M6 GT3.

Here are five key takeaways from a hot one in upstate New York:

1. One Point Separating First from Second in All Three Classes

The Sahlen’s Six Hours of The Glen was the sixth of 10 races for the Prototype class and the fifth of 11 for both GTLM and GTD, and the championship battles in all three classes are shaping up to be legendary. Just a single point separates first from second place in all three.

The championship race in the Prototype class actually “opened up” a tiny bit at Watkins Glen, as the pair of Action Express Racing teammates that came into the race tied now have one point between them. Leading the way is Filipe Albuquerque in the No. 5 Mustang Sampling Cadillac DPi-V.R by virtue of his sixth-place finish in the Sahlen’s Six Hours of The Glen with co-drivers Christian Fittipaldi and Gabby Chaves.

Albuquerque leads Felipe Nasr and Eric Curran – who took seventh in the No. 31 Whelen Engineering Cadillac DPi at Watkins Glen with third driver Mike Conway – by a count of 169-168.

It’s another pair of teammates atop the GTLM standings, as Hand and Mueller parlayed their Watkins Glen victory into the WeatherTech Championship points lead in the No. 66 Ford GT by one point, 147-146, over Richard Westbrook and Ryan Briscoe, who now are second in the No. 67 Ford GT. Those two had led the GTLM championship from their season-opening victory in the Rolex 24 At Daytona throughSunday’s race at Watkins Glen where they finished sixth.

And while they’re not official teammates, there are a pair of “Team ATL” members battling it out for GTD supremacy. Madison Snow and Atlanta’s Bryan Sellers continue to lead the standings – as they have since winning March’s Mobil 1 Twelve Hours of Sebring Presented by Advance Auto Parts – in the No. 48 Paul Miller Racing Lamborghini Huracán GT3.

Sitting second is another Atlanta resident, Katherine Legge, who co-drove to a second-place finish in the No. 86 Meyer Shank Racing Acura NSX GT3 with Alvaro Parente in Sunday’s race. Legge trails Sellers and Snow by a count of 155-154.

The championship battle moves north of the border this Sunday for the two-hour, 40-minute Mobil 1 Sports Car Grand Prix at Canadian Tire Motorsport Park. It will be televised on FS1 on a delayed basis beginning at 4 p.m. ET and will be carried live by IMSA Radio on IMSA.com, RadioLeMans.com and SiriusXM Radio.

Tickets are available now on CanadianTireMotorsportPark.com.

While Daytona Prototype international (DPi) cars had won every race and Motul Pole Award of the 2018 season prior to last weekend, the tables were definitely turned at the Sahlen’s Six Hours of The Glen. 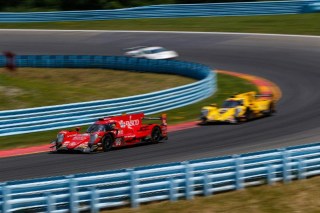 Friday’s pair of practice sessions ended with Romain Dumas atop the time charts in the No. 54 CORE autosport ORECA. In Saturday qualifying, Colin Braun showed that Dumas’ Friday performance was no fluke, putting the No. 54 on pole with a Prototype class track record.

What’s more, he led a 1-2 sweep of qualifying for LMP2 cars, as Paul Di Resta put the No. 32 United Autosports Ligier second on the grid.

It was more of the same in Sunday’s race. ORECA swept the top two spots, with Simpson, Goikhberg and Miller taking the victory in the No. 99 GAINSCO machine ahead of Dumas, Braun and Jon Bennett – who ended up starting the race from the rear of the Prototype grid in a strategy call and put in yeoman’s work in his opening double stint before giving way to Braun and Dumas.

And for good measure, Di Resta and co-drivers Phil Hanson and Bruno Senna made it three LMP2s in the top four with a fourth-place run in the No. 32. In total, the Nos. 99, 54 and 32 combined to lead 64 of the 202 total laps run in the Six Hours

One of the key storylines of the GTD championship-winning performance by Christina Nielsen and Alessandro Balzan last year was the then-No. 63 Scuderia Corsa Ferrari squad’s impressive run of six consecutive podium finishes. 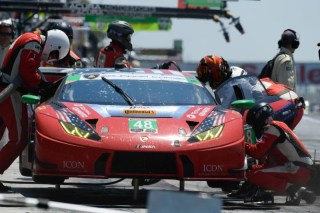 Well, don’t look now, but the No. 48 Paul Miller Racing Lamborghini team and co-drivers Sellers and Snow now have finished on the podium in all five races this season. They’ve actually got one more win than Nielsen and Balzan had at this point in the season last year, and four other third-place results, including the Sahlen’s Six Hours of The Glen.

“What a good race,” Snow said. “In practice, we didn’t quite have the pace to win the race, but once we got into the race, we knew we could be consistent and run the whole race and get faster in the end. That’s how we’ve been able to get on the podium at all the other races this year. It was definitely hot for us to only run two drivers, but it worked out just fine. We’ve had a great season so far, and everyone has done a great job to just keep this momentum going.”

Since finishing a season-best second in May’s Acura Sports Car Classic at Mid-Ohio behind teammates Helio Castroneves and Ricky Taylor in the No. 7 Acura DPi, Cameron and Montoya have finished third twice – in last month’s Chevrolet Sports Car Classic in Detroit and on Sunday in Watkins Glen. 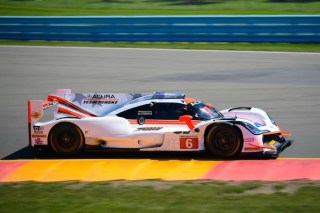 But while the podium run is appreciated and has helped them move into third in the Prototype championship standings, just 13 in arrears of leader Albuquerque, the No. 6 duo really wants a win. They came close on Sunday, leading a race-high 124 laps.

“The podium’s really good, it was a really good points day,” Cameron said. “It was disappointing to be third after pretty much leading the entire race, but that’s the box we have to work in right now and it kind of reared its head with a poor-timed yellow for us for what we could do on fuel.

“We were a bit of a sitting duck in a straight line horsepower-wise, so those two things kind of played out poorly for us there at the end and cost us those two spots. Acura Team Penske is doing a great job right now and three podiums in row so we’ll keep digging our way up to the front of the points here, hopefully.”

The battle for the Tequila Patrón North American Endurance Cup is already three-quarters of the way over with the Rolex 24 At Daytona, Mobil 1 Twelve Hours of Sebring and Sunday’s race now in the rearview mirror with only the season-ending 10-hour Motul Petit Le Mans at Road Atlanta in October still to come.

Nevertheless, the battles for 2018 Patrón Endurance Cup honors in all three classes are still alive. The No. 31 Whelen Engineering Cadillac DPi team of Curran, Nasr and Conway currently has the largest lead of any of the three classes, with six points (31-25) in hand in the Prototype standings over their teammates, Albuquerque and Fittipaldi with the four-time defending Patrón Endurance Cup No. 5 Mustang Sampling Cadillac team. 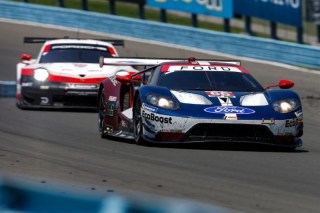 However, the Prototype class also features the most cars still mathematically in contention. There is a total of seven still with a shot, including both the Nos. 6 and 7 Acura Team Penske entries, which have 24 points each; the No. 22 Tequila Patrón ESM Nissan DPi team of Pipo Derani, Johannes van Overbeek and Nicolas Lapierre with 23; the No. 32 United Autosports squad with 23 points and the No. 54 CORE autosport team with 22 points.

In the GTLM class, it’s down to the pair of Ford Chip Ganassi Racing entries and the No. 911 Porsche GT Team. Watkins Glen winners Hand and Mueller now lead the standings in the No. 66 Ford GT by four points, 33-29, over Patrick Pilet and Nick Tandy in the No. 911 Porsche 911 RSR. The No. 67 Ford GT team of Westbrook and Briscoe is the only other one still mathematically eligible with a total of 28 points.

The GTD battle for the Patrón Endurance Cup is a four-team battle royale with the No. 33 Mercedes-AMG Team Riley Motorsports Mercedes-AMG GT3 trio of Ben Keating, Jeroen Bleekemolen and Luca Stolz leading the way. They have 31 points compared to second-place Legge and Parente in the No. 86 Meyer Shank Acura NSX GT3 team, which has 29 markers.

The No. 48 Paul Miller Racing Lamborghini squad of Sellers and Snow is still in it with 26 points, while the No. 29 Montaplast by Land Motorsport Audi R8 LMS GT3 co-driven by Christopher Mies and Sheldon van der Linde also remains in contention with 24 points.

Each team can score a maximum of 15 points and a minimum of six points from the three final scoring intervals in the Motul Petit Le Mans on Saturday, Oct. 13.