Sunday in Las Vegas, Travis Pastrana will attempt to replicate and safely exceed the lengths of three of the most famous jump attempts by legendary motorcycle daredevil Evel Knievel – including flying over the fountain at Caesar’s Palace – a stunt that almost killed Knievel in 1967.

Pastrana, 34, will try to channel Knievel during a three-hour live broadcast on The History Channel (8 to 11 p.m. ET) titled “Evel Live.” He will do one different jump per hour, and each jump will be slightly longer than those that Knievel originally attempted.

“We have this awesome opportunity to recreate three of the most iconic jumps by the most iconic stuntman who ever lived,” Pastrana told People.com. “I really want to bring back the showmanship and the fun of these events.”

In addition to the fame associated with the event, the 34-year-old Pastrana has one other goal, as he told TheWrap.com: “Try not to die.”

Even on Pastrana’s own web site, NitroCircus.com, is asking, “Will Travis Survive the Stunt That Almost Killed Evel?”

Pastrana will start off the evening attempting to fly over 52 crushed and stacked cars (155 feet in length), then will fly over 16 buses (238 feet), and the grand finale of jumping 155 feet over the fountain.

Knievel made attempts over 50 crushed and stacked cars, 14 buses and a slightly shorter distance over the Caesar’s Palace fountain.

One thing of note to mention: Due to construction and capital improvements/modifications over the years since Knievel’s fountain jump, Pastrana will have a very difficult challenge: approximately half the stopping area than Knievel did when he made his attempt over the fountain. 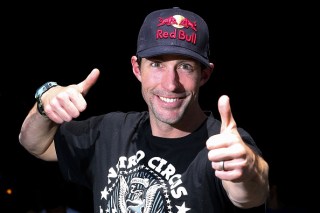 To further honor Knievel, who made most of his jumps in a trademark red, white and blue firesuit with stars on it and a cape around his neck, Pastrana will wear a similar outfit.

Pastrana will also ride a similar type of bike – an Indian Scout FTR750 V Twin – that Knievel used on most of his famous leaps.

The Indian Scout is about twice as heavy as the lightweight dirt bikes Pastrana is used to riding. But he wanted to keep all the jumps as close as possible to Knievel’s stunts, which is why he’ll be riding the Scout.

“My God, how did he get this tank in the air?” Pastrana told People.com about Knievel’s bike. “In true Evel fashion, every time I jump it it’s scary. The motorcycle is awesome. It’s got great power and awesome delivery. It’s super, super fast but it’s not meant to fly.

“It’s hard to manipulate in the air and if you take off wrong it’s kind of how you’re going to land. I’ve got three jumps. If I crash the first one and I’m physically able to get up I have to get back up. Not just for me, but for what we’re doing.”

The fountain could be the most difficult jump for Pastrana. It certainly was for Knievel, who suffered a crushed pelvis and femur, fractures to both hips, wrists and ankles and a concussion.

Pastrana obviously hopes a similar fate does not befall him. But at the same time, he’s prepared for the risks he’s undertaking.

If conditions such as wind change while in mid-jump, he’ll have to make split-second adjustments on the fly – no pun intended – and hope he lands safely.

Knievel, who made over 75 jumps in his daredevil career and still holds the Guinness Book of World Records for most broken bones in a career (433), passed away in 2007 from heart failure at the age of 69 years old.

Sportscaster (of “American Ninja Warrior” fame) and licensed physician Matt Iseman will call play-by-play of all three of Pastrana’s jumps.

“The reality is this entire show hinges on him nailing it,” Iseman said of Pastrana to the New York Post. “If this guy has a pulse, if he can rev a gas handle, he’ll go and that’s what makes me love him and fear for him at the same time.

“He’s as close to Evel Knievel as we’ve got.”

Here are videos of three of Knievel’s infamous jumps that Pastrana will attempt to replicate – but hopefully not have the same outcomes on two of them: