Josef Newgarden continues to have a hot hand – and right foot.

The defending Verizon IndyCar Series champion won two weeks ago at Road America, was second in Saturday’s first practice in the morning at Iowa Speedway, qualified No. 2 for Sunday’s Iowa Corn 300 and was No. 1 in Saturday’s final practice session.

The first came due to debris on pit road with just over 28 minutes to go.

Then, with just over eight minutes to go, the motor on Simon Pagenaud’s Team Penske Chevrolet let go.

“It was a big puff of white smoke, so we probably lost an engine,” Pagenaud told the INDYCAR Radio Network.

But Pagenaud remained unfazed by the issue, saying his team can come back as strong, if not stronger, during Sunday’s race.

“No question, we’ll be in good shape tomorrow with Chevy to turn the situation around,” Pagenaud said. “I think we have a top-5 car and anything can happen here. We’re hoping for a good result.” 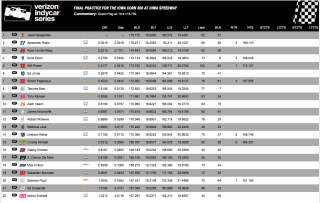