“It’s such an honor to live a day in Evel’s footsteps and literally in his boots,” Pastrana told The History Channel, which televised the three-hour event live. “I made my dreams come true and hopefully everyone enjoyed the show.

“Man, it’s been such an honor and been an awesome career. I’m not done yet, but this was definitely the coolest thing I’ve ever been able to do.” 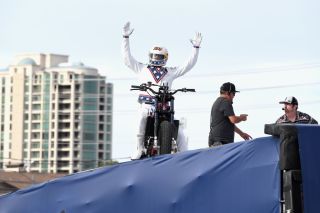 Pastrana came into the night having previously told the New York Post he had one goal — “Try not to die” — and he successfully achieved that.

Dressed in a red, white and blue starred firesuit and cape that paid homage to Knievel’s trademark outfit, Pastrana began the night by jumping 52 crushed cars, surpassing Knievel’s mark of 50 cars. The length was a record 140 feet.

Then, Pastrana jumped 16 Greyhound buses (a record 193 feet), breaking the 14 buses that Knievel jumped during his career in 1975 (although Knievel crashed while jumping 13 buses at London’s Wembley Stadium five months earlier in 1975).

MORE: Travis Pastrana’s goal: ‘Try not to die’ in bid to replicate 3 of Evel Knievel’s most famous jumps

Then came the grand finale: Jumping the main fountain at Caesar’s Palace. When Knievel attempted the same jump in 1967, he crashed and suffered extensive injuries.

That was not the case for Pastrana, even though he had a significantly smaller area for both takeoff and landing due to capital improvements and expansion of the same area over the years after Knievel made his jump attempt more than 50 years ago.

Prior to making the final jump, Pastrana told The History Channel, which televised the three-hour event live, “This has been absolutely amazing. The other two jumps I had enough time to hit my marks exactly perfect. I have just so much respect for Evel for having paved the way for us.

“This (jumping the fountain) is definitely the most technical.”

After his first two jumps, Pastrana – with a police escort – traveled down Las Vegas Boulevard doing burnouts and wheelies, taking selfies with and giving high-fives to fans who lined the roadway as he made his way to Caesar’s Palace.

“This was so cool, such an epic time,” Pastrana told The History Channel. “To be able to get a police escort, doing wheelies and burnouts on the Strip in Las Vegas, come on!”

But Pastrana grew more serious knowing the most dangerous and technical jump was still to come.

“It’s just been a lot of fun, but really, this is the one that matters the most to me,” Pastrana said. “This is the most infamous location, Caesar’s Palace, to jump the fountain. It’s not the longest jump, but by far the hardest.”

Even with just a 200-foot run-off area, Pastrana made the final and most difficult jump (a record length of 149 feet) look easy, even performing a NASCAR-style two-wheeled burnout in celebration.

Conditions were near-perfect weather-wise, although the temperatures were between 105 and 110 degrees, with temps on the surrounding asphalt – much like on a racetrack – hovered around 125 degrees.

Pastrana then capped things off with one final and successful jump: he ran and jumped into the fountain, a fitting ending to one of the most outstanding extreme motorsports events ever seen.

Check out some posts from social media, including video of some of his jumps: