Scott Dixon made it two-for-two Friday afternoon, leading the second practice of the day to go along with being the quickest in the first session earlier in the day on the temporary street course layout for Sunday’s Honda Indy Toronto.

“The PNC Bank car rolled off really fast off the truck and I expect the competition to continue to be really tough,” said Dixon, who was nearly a half-second better than the field and with a top speed of 108.838 mph. “We put a good lap together on the red Firestone (alternate) tires today, but I expect a lot more drivers to do that tomorrow for qualifying, so we’ll have to wait and see what happens here in Toronto for the pole.”

Graham Rahal recovered from an earlier spin to record the fourth-fastest time and Alexander Rossi rounded out the top-5 (at 59.5846).

Much like the first session, Hondas dominated, with the top five and eight of the top 10 in the second session wearing Honda badges. Pigot and Newgarden were the only Chevrolet-powered drivers in the top-10.

There were three incidents of note:

* Graham Rahal spun in Turn 11 in the session, bringing out a red flag practice stoppage.

However, Rahal did not make contact and the red flag was very brief before action resumed.

* Will Power brushed the wall late in the session but damage appeared minimal.

Ed Jones also spun at the end of practice without any contact.

Also, Conor Daly is out on track today in a one-off start this weekend in place of Gabby Chaves. 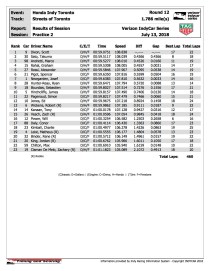