Sunday for the Mazda Road to Indy Presented by Cooper Tires completed their weekend on the streets of Toronto, and the “concrete canyon” north of the border more than made its mark on the title fights in all three series.

The Indy Lights Presented by Cooper Tires saw a fringe title contender keep his hopes alive with a win, while one of the main combatants finished second as the other DNF’ed due to an injury.

And the Pro Mazda Championship Presented by Cooper Tires saw a once sizeable gap between the top two in title chase almost completely erased after a weekend sweep for the driver in second and a second tough outing for the points leader.

Meanwhile, the Cooper Tires USF2000 Championship Powered by Mazda saw its points leader essentially put one hand on the championship trophy after completing a weekend sweep of his own.

Reports on all three races are below.

Santi Urrutia led from the pole and led every lap on his way to a dominant victory in Indy Lights Race 2 on the streets of Toronto.

It is the second victory of the year for Urrutia – he won Race 2 on the streets of St. Petersburg – and sees him gain a little ground on points leader Pato O’Ward in the championship. O’Ward finished second, followed by Aaron Teltiz.

However, Colton Herta, who suffered a thumb fracture in a crash just after taking pole in Race 1 qualifying and crashed again during Race 1 to further complicate the injury, pulled off after only doing a couple of laps. A disappointed Herta was following guidance of the Andretti-Steinbrenner Racing team, as contesting Race 2 on the bumpy Toronto street circuit could have ultimately caused further problems for Herta and made the injury worse.

Victor Franzoni also pulled off after only a few laps, but his DNF was down to budget concerns. A crash in Race 1 forced him and Juncos Racing to conserve resources and finances in Race 2, and they elected to pull off rather than risk more crash damage.

Results of Race 2 are below. O’Ward now leads Herta by 18 points, with Urrutia closing the gap down to 40 between the top three.

Rinus VeeKay was once again in perfect form in Pro Mazda Race 2 on Sunday, leading every lap from the pole to take his second win of the weekend, and his fourth of the 2018 season.

VeeKay led from the pole off the start, but the battle from second on back was a tightly contested battle royale in the opening laps. Robert Megennis got around David Malukas for second on Lap 1, but the two of them had the rest of the field on their tails as Oliver Askew, Carlos Cunha, Sting Ray Robb, Raul Guzman, Andres Gutierrez, Parker Thompson, and the rest of the field created a train behind them.

Things came to a head at the beginning of Lap 3 when Guzman and Gutierrez got together in the final corner – their contact and crash resulted in a lengthy caution after the back of Guzman’s No. 27 RP Motorsport Tatuus PM-18 came off and dropped a lot of fluid on the track.

VeeKay again shot off into the lead and away from the field when racing resumed, while the previously intense battle for second picked up right where it left off, with Megennis, Malukas, Robb, Cunha, Thompson, and Nikita Lastochkin again continuing their train from P2 on back.

It was here that Thompson’s Race 2 unraveled, as he tried a dive inside of Robb to take sixth in Turn 3, but overshot the corner slightly and ended up making slight contact with Robb. Thompson subsequently pitted, thinking the car suffered damage after he began falling back. He eventually rejoined the fight, but two laps off the lead.

Up front, VeeKay seemed to be on cruise control in the lead, while Askew emerged in second ahead of Megennis. However, the finish was put in doubt due to a late caution when Cunha and Malukas went off in Turn 3 in separate incidents – Cunha slid into the tire barrier, while Malukas slid into the runoff area.

That allowed Askew to get on VeeKay’s gearbox for a final restart, but VeeKay held him off in the final laps to complete the weekend sweep. Askew came home second, his best finish of the season, while Megennis came home third, his third podium of the year.

Race 2 results are below. VeeKay now trails Thompson by only seven points.

USF2000 also saw a driver complete a weekend sweep, as Kyle Kirkwood took his second win of the weekend, but things were not quite as straightforward in this one.

Kirkwood started eighth, and found himself in the lead after a chaotic Lap 1 saw Keith Donegan and pole sitter Kaylen Frederick overshoot Turn 3 – Donegan ended up in the tire barrier while Frederick was blocked by Donegan’s incident. It resulted in a Turn 3 pileup that also collected Dakota Dickerson – he spun in the aftermath – as well Darren Keane, Colin Kaminsky, Russell McDonough, and more.

When racing resumed, Kirkwood was immediately under threat from Igor Fraga, who quickly got by him in Turn 3.

Kirkwood then spent the rest of the race hounding Fraga at every corner, several times trying an outside pass entering Turn 3, but coming up short every time – he even came close to crashing once after locking up the brakes and overshooting the corner entry.

However, in Turn 8 in the final minutes, Kirkwood was finally able to make the winning move and pass Fraga for the lead, which he held from there to take the win.

Rasmus Lindh finished third after a race-long battle with Daniel Frost and Kaylen Frederick, who rebounded to run inside the top five. Frost ended up fourth, in his USF2000 debut, while Frederick went off again in Turn 3 in the final minutes and fell back to eighth. Julian Van der Watt rounded out the top five in fifth.

Results are below. Kirkwood’s championship lead now stands at an astounding 131 points over second-place Frederick. 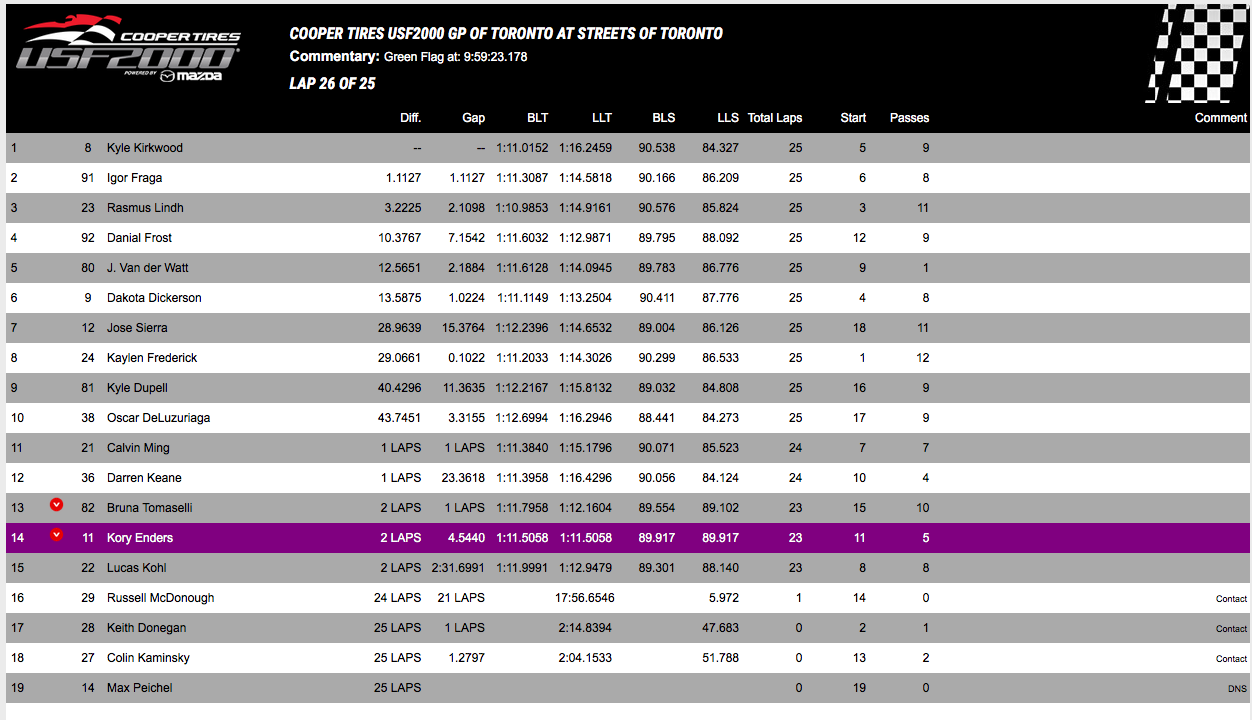