Sunday morning’s final warm-up for this afternoon’s Honda Indy Toronto saw plenty of speed – but also some incidents that could impact drivers and cars for the race itself.

As for on-track incidents, with about seven minutes to go, Jordan King lost control coming into Turn 10 and went straight into the tire wall, resulting in significant damage to his car. King is qualified eighth for today’s race.

King told the IndyCar Radio Network that his team didn’t believe the damage was too bad and that it could be repaired for the race at 3:30 p.m. ET (live on NBCSN).

“The steering wheel kicked back a bit and it just slightly slipped out of my hand and that was it,” King said. “The damage is not too bad.”

As the checkered flag came out to end the session, and not far from where King hit the tire wall, veteran driver Tony Kanaan spun coming out of Turn 10 and heading into Turn 11 but did not make any contact.

At the same time, Ryan Hunter-Reay carried his car into the run-off area in Turn 3 but was able to exit under his own power and continue on. 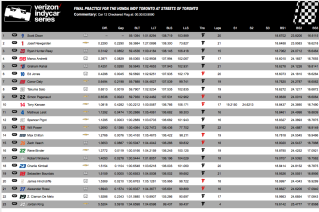