If you’re a fan of NHRA Funny Car racing and Dodge/Mopar, you may notice something different at this weekend’s Dodge Mile-High NHRA Nationals at Bandimere Speedway in suburban Denver, Colorado.

Two-time (2011 and 2014) NHRA Funny Car champ Matt Hagan – who has won the last two NHRA national events in the last four weeks – will be piloting a newly-designed 2019 Mopar Dodge Charger SRT Hellcat, a 10,000-horsepower Funny Car that was unveiled this morning ahead of Dodge/Mopar’s premier NHRA national event.

The new Charger SRT Hellcat succeeds the former Mopar Dodge Charger R/T, which had been in use since 2015.

“We improved on the body design,” Hagan said of the new Charger Hellcat. “It was already a great design, a great body. But now, we’re going to have a little more downforce, a little more traction on these racetracks and it will be a huge performance advantage.”

The new Hellcat includes a number of innovations, including a new front splitter to increase downforce. Just like its predecessor, the R/T, the Hellcat will go head-to-head with Chevrolet’s Camaro in the NHRA Funny Car ranks. 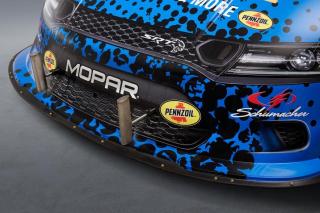 * “At the front, the shape of the nose has been tweaked and a new splitter (photo), built of carbon fiber and Kevlar like the rest of the Funny Car body, has been added. The splitter substantially mimics the look and shape of the production vehicle’s splitter while generating greater downforce to help plant the Funny Car to the track.

* “Bodyside scallops have been redesigned to more closely identify with the production Hellcat while also enhancing on-track function and performance. The deeper character lines provide greater visual ties to the street version of the Hellcat, while also helping to mitigate the “body burn” common on all Funny Cars due to the close positioning of the exhaust headers.

* “The location of the burst panel on the hood has also been reworked. The panel is now centered over the top of the engine to more efficiently release energy and pressure in the event of engine issues, a common occurrence in race cars that are pushed to the razor’s edge of performance.”

Since the R/T was first introduced into the Don Schumacher Racing corps, it has gone on to 50 wins, 42 runner-up finishes and 40 No. 1 qualifiers in NHRA national events and one NHRA Funny Car World Championship (Ron Capps, 2016).

While Hagan will drive the first Hellcat, his other three Dodge-powered DSR teammates – Capps, Jack Beckman and Tommy Johnson Jr. – will soon take delivery of their own versions of the car over the remaining 11 races of the 2018 season.

One day after winning two weeks ago at Norwalk, Ohio, Hagan and crew chief Dickie Venables put the new Hellcat through its paces with several test runs. The results were so strong that it was decided to debut the car at Denver and run all qualifying and elimination rounds with it.

“We made four good, solid runs in testing at Norwalk,” said Hagan. “We put the body through a lot of different things and were really, really pleased with it.

“I really think it’s going to translate over to performance on the race track, and hopefully more win lights in the future.”