Hunter-Reay covered the 2.2-mile permanent road course in 1:05.1950. Hunter-Reay led a Honda-powered contingent that made up seven of the 10 quickest driver times.

“(The second practice is) a busier run out there. The car is on top of the racetrack. This place can be a little bit strange like that. You have to wait till it rubbers up to tune on the car. Tomorrow we’re going to have to make it a bit better.

“I know Scott (points leader Scott Dixon) is going to be charging right to the front as well. Good thing is we have a good starting spot, a baseline I guess you can say, to build on for tomorrow.”

Sebastien Bourdais, who was quickest in the first practice session Friday morning, struggled to 14th-quickest (1:05.9454) in the second session. 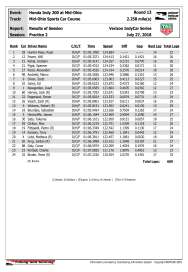 Notable incidents during the session included:

* Jack Harvey, making just his fourth race appearance of the season and first since the Indianapolis 500, completely lost power in his Meyer Shank Racing Honda coming out of Turn 9 early in the session.

“I was going through Turn 9 and then I lost everything,” Harvey told the IndyCar Radio Network. “The car just kind of came to a stop. We’re not entirely sure why. It’s something mechanical. We’re hoping to get it fixed here so we can go back out on the track.”

* With about 24 minutes in the session, Will Power lost it in Turn 4, bringing out the red flag again. Power also had an issue in the first practice session, spinning in Turn 12.

* Matheus Leist, who also had a problem in the first practice, spun in Turn 1 with about seven minutes remaining.